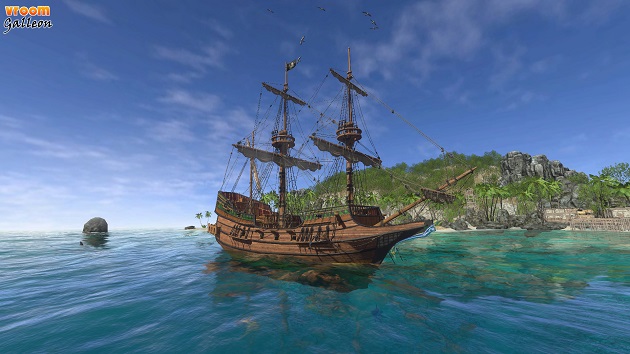 kideternal the developer behind VROOM: Aerie launched a Steam Greenlight campaign back in April for a similar videogame that uses the VROOM branding, this time named VROOM: Galleon. Now VROOM: Galleon has been officially launched on Steam for the Oculus Rift head-mounted display (HMD).

VROOM: Galleon is a first-person exploration experience, allowing players to walk around an English 16th-century race-built galleon, which the developer claims has been remade in virtual reality (VR) with historical accuracy. Players will be able to walk into cabins, fire each of the 12 cannons found on board, climb up to the ship’s crow’s nest, discover their own collection of treasure and even take control of a seagull and fly around the area.

The experience has been designed exclusively for VR HMDs, and while only the Oculus Rift is currently supported kideternal does plan to support the HTC Vive HMD in the future. VROOM: Galleon can be downloaded for £6.99 GBP.

The developers previous project VROOM: Aerie allows players to explore a luxury apartment in first-person, with a total of 42 intractable objects to discover and use.

VRFocus will continue to follow the latest updates from kideternal, reporting back any further announcements.