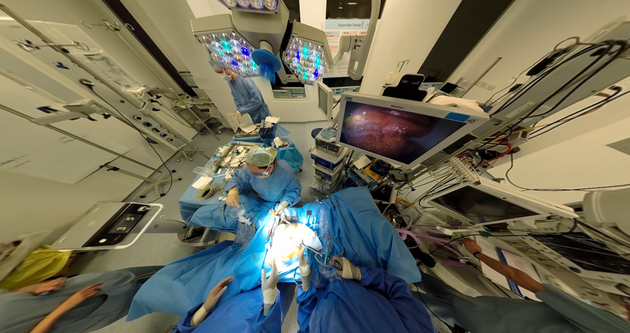 Last week VRFocus reported that Dr Shafi Ahmed based at St Bartholomew’s Hospital, London, UK would be live-streaming a complex operation within virtual reality (VR) for viewing on the Google Cardboard head-mounted display (HMD). The stream took place later that week and saw Dr Ahemd work on a patient with colon cancer. For those that missed the stream, it can now also be viewed on the Gear VR mobile-based HMD with the release of the VRinOR app on that platform.

Developed by Spot Seven and available for free, VRinOR is an educational app that will let users watch that three-hour operations in 360 degrees. For those that don’t have a Gear VR unit, the app can also be downloaded on both iOS and Android operating systems and then viewed with the Google Cardboard smartphone-based HMD. It’s not been confirmed yet but, hopefully in time, other such operations will be made available on the platform.