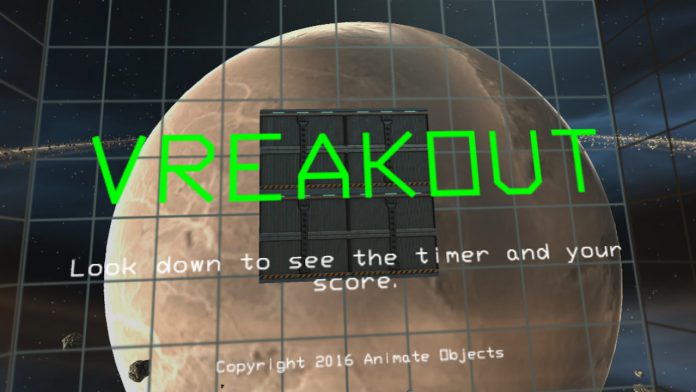 Though many of the titles in development for the HTC Vive virtual reality (VR) head-mounted display (HMD) were released on the kit’s ‘launch day’ earlier this week, there have been a handful of releases since 5th April. Among these is VReakout, a new title from Animate Objects. The Room-Scale supported videogame is now available via Steam’s Early Access system ahead of the launch of the full version later on in the year.

As the name suggests, VReakout is a new take on the classic brick breaking genre within VR. Set in deep space, players are tasked with hitting a series of bricks in every level by throwing balls using the HTC Vive’s position-tracked controllers. These balls will bounce off of surfaces, allowing you to angle shots that get around unbreakable objects. During the course of the Early Access run, Animate Objects intends to update the project with new levels, though there are already 60 in the initial release.

VReakout is available for a discounted price of £3.19 GBP until 15th April, when it will go back up to £3.99. The full release of the title is planned for mid-summer 2016, likely at a slightly higher price point.

Check back with VRFocus for the latest VR releases.