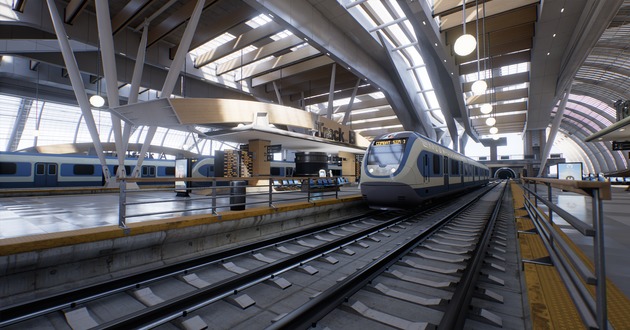 Epic Games has been a keen supporter for virtual reality (VR) technology with its popular Unreal Engine 4 middleware. Most recently, the company revealed a brand new tech demo for the Oculus Rift head-mounted display (HMD) that was created in-house. The piece, called Bullet Storm, is regarded as one of the best experiences to use the Oculus Touch position tracked controllers, and has been shown off at events like Oculus Connect 2 and more. Next month, however, Epic Games will detail exactly how they made Bullet Train.

Lead Engineer Nick Whiting and Senior Designer Nick Donaldson will host a session titled ‘Going Off the Rails: The Making of “Bullet Train“‘ at the 2016 Virtual Reality Developers Conference (VRDC) and Game Developers Conference (GDC) from 14th – 18th March. The pair will talk about design considerations for the project, in which players use the Oculus Touch controllers to realistically wield weapons and take on hordes of faceless soldiers in a train station environment.

The event’s Takeaway description reads: “See how a small team created the entire “Bullet Train” VR demo from scratch in only 10 weeks, and understand the specific design considerations and tradeoffs used to match players’ expectations of a highly-kinetic interactive VR experience.”

VRFocus will be at VRDC and GDC to deliver the latest updates on VR technology.