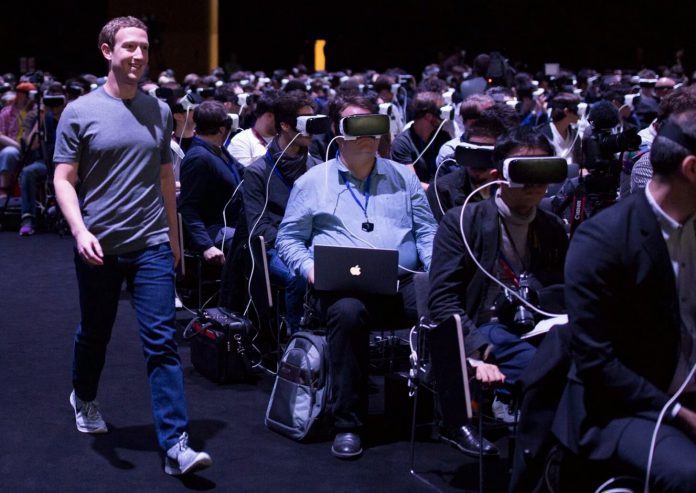 Mark Zuckerberg is mastering the art of surprise. The Facebook CEO unexpectedly joined Oculus VR on-stage at the Oculus Connect 2 developer conference last year and, last weekend, shocked a room full of journalists and more when he spoke at Samsung’s Unpacked press conference in Barcelona, Spain. The latter event was particularly well devised; everyone in the room had a Gear VR unit strapped to their heads when Zuckerberg marched through and onto the podium at the centre, appearing as if from thin air when people removed their head-mounted displays (HMDs). It was a nice idea, but it somewhat backfired thanks to one unfortunate picture.

This strikingly Orwellian image was taken as the CEO confidently strode towards the stage. Behind him, a sea of people using his product are linked in unison, watching one video, entirely unaware of his presence. It sounds dramatic, but it’s hard to avoid the comparisons to Lemmings or some other mindless hive of bodies all under the control of one overlord, and it gives Zuckerberg’s undoubtedly innocent smile a decidedly twisted tinge. His following talk of connecting the world through 360 degree video and sharing his daughter’s first steps in VR may speak to a future we all want to see, but it was quickly overshadowed with this one photo.

Ironically, what first came to mind here – other than playing The Imperial March over the top – was Notch, as in Markus Persson, the creator of Minecraft. Back in 2014, when Facebook purchased Oculus VR for some $2 billion USD, the iconic indie developer famously cancelled plans for a VR version of his ever-popular creation title. On Twitter, the developer made the reasoning very simple: “Facebook creeps me out.”

It’s hard not to look at the image above and not be ‘creeped out’.

It’s not exactly a premonition – Facebook hasn’t done anything wrong – but even if you’re not into the conspiracies that surround the company and the data it holds, this image is a perfect embodiment of Notch’s fears. True, the developer went on to sell Minecraft and creator Mojang to Microsoft for even more money, but his thoughts from that day have never seemed more relevant than right now. Minecraft VR is back on, but it will forever be a reminder of the resistance to the Oculus VR acquisition.

This isn’t to say that the VR community should steer clear of the Oculus Rift and Gear VR – even if it was you couldn’t be more trusting of HTC or Sony either – but there is a warning to be had here. Ultimately, the first few years of VR are going to be about you and your videogames, films and, yes, some more primitive social experiences. At some point, however, companies like Facebook are going integrate themselves with these HMDs in much more meaningful ways. No, they won’t be looking to turn you to slaves or swear corporate loyalty, but you might want to think carefully about how much of that future you want to be a part of.

Facebook is doing tremendous work connecting the world with initiatives such as Internert.Org. As far as CEOs go, there are few that seem more genuine than Zuckerberg, and he’s a far cry from the suited, robotic individuals leading many other large VR players. We’ve all used his service to reconnect with people, share out favourite memories and create new ones. That’s going to carry on through the virtual generation and that great work will no doubt persist and expand, but this image is a stern reminder to be cautious about giving too much of ourselves over to one organisation. When VR is fully realised and we can shake the hands on friends on the other side of the world, do we really want one group to be in charge of it all?