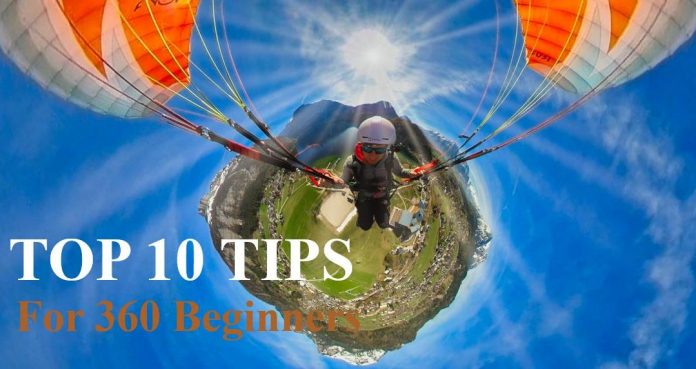 We now have chosen a 360 camera (8 Tips to Choose the Best 360 Camera in 2019), so point and shoot and you’re ready to go. Is that easy for virtual reality photography and videography? Actually, nope.

After your first virtual reality shooting, you may be disappointed to find that the photos and videos are not what you expect: blurry photos, broken-face-footage, big-thumb-videos…You maybe do something wrong during the shooting, so how to get your pictures and VR videos to look as good as others?

Here are top 10 tips for any 360 beginners in VR photography and videography. Let’s see them one by one.

As the saying goes, the secret to success is to be prepared. There needed to be preparation done in advance of the shooting. In case you miss anything and put the shooting at risk, make a pre-shoot checklist like your camera, tripod and lens cloth. Check it twice will be much help, so you have time to make it up. No matter what you shoot, there are always three things that you should pay attention to, and here they are:

1. Charge the 360 VR camera or Bring the Power Bank

It is not a rare thing that you sadly find the battery level is low and you just start your shooting! You cannot always have the chance to shoot a second time, so what you can do is always prepared for the best. Depending on the type of camera you shoot with, for example, QooCam can shoot 360 VR photos up to 3 hours, most of the VR cameras now only support one hour 360 videography or so. As a result, it is important for you to bring an extra power bank to charge the camera, or you may miss the wonderful scenery once it runs out of battery.

If you get used to using the SD card reader to transfer footage to a computer, you are more likely to forget to insert the SD card back. Always remember to check your SD card and make sure it is not full.

Before you press the shooting button, the simplest but also the one you probably forget is to clean the lens. Don’t laugh. I couldn’t tell you how many times I have seen the dust or raindrop or fingerprint ruins the amazing footage. It is just like one bad apple spoils the barrel. You have no way to rescue it, but you could only save the next ones if you remember to clear the lens. The lens is vulnerable to any scratch, so always bring a lens cloth with you instead of using the tissue or your clothes to do the job. While these three tips will get you started, don’t stop here and go to the next stage.

You can handhold the camera for shooting, but if you want your head appears more natural or avoid the giant finger problem, then you will need a selfie stick. Use the selfie stick to get your virtual reality VR camera above your head, and you will get different perspectives.

However, in 360 photography, don’t let the traditional photography routines misguide you. You will need to learn new photography techniques for VR photography.

4. Use the Selfie Stick in the Right Way

The first mistake that every 360 beginners will experience is the wrong way to use the selfie stick.

It is a standard way to tilt the camera’s head and face the lens towards you. The selfie stick will be visible in the 360 images or virtual reality videos.

Here are two typical cases when you can make good use of the selfie stick.

You don’t have to lower yourself hard to capture the animals or kids at eye level. Extend the stick to the desired length, and send the camera to the place where it is hard for you to reach.

-No Drone? No problem!

Consider the situations when you are among crowded people and a drone is prohibited, or consider the limited budget for the project. You may not want to spend a lot on a drone just for some aerial shots. Then why not attach a 360 camera to a selfie stick and holding it high?

5. You Don’t Need to Rotate the Lens to Capture

The second mistake for 360 photography is always to rotate the lens to capture the subject. For traditional photographers, shooting and editing are closely connected. They would love to do the composition when they shoot. It is a totally different story in panoramic photography. The 360 degree camera allows a greater level of convenience in shooting and more freedom in editing because it captures everything around you.

Firstly, you don’t have to set up many cameras to capture every angle in case you miss something amazing. Secondly, you don’t have to anticipate where the action will happen. Also, you don’t have to reshoot it, even you have a tight schedule. When shooting, you can just point and shoot with a 360 degree camera, and then all context is included in a single 360 field of view picture/video. During editing, just browse the 360 footage, explore the details by zoom or crop or perspective change, and select the most appealing part.

For 360 photos, you can literally make a food photo, a scenery image or a group picture with landmarks around you. It can all be achieved in a single shot!

For 360 video, use the “key point” in the companion app or stitching software in later video production to edit and direct attention. The 360-degree videos can be transferred into fixed frame footage for quickly save or share in VR platforms. A 360 degree camera gives you ultimate flexibility in the shooting and storytelling editing.

6. Realize You are Being Filmed

Another mistake is not realizing that you are being filmed no matter where you are in 360.

It is a common practice among traditional photographers to stand behind the camera and monitor the shooting with a viewfinder. You won’t show up in the footage. While in virtual reality VR photograph, nothing gets out of frame. You are actually in the story. Realizing this fact is one of the biggest obstacles you need to overcome with 360 photography.

You need to learn how to treat a 360 camera like a real person. It is not just a device that records the moments. Instead, considering its 360 capability, it is more like a person that experiences the moment as you do. With 360 degree video or 360 panoramas, it allows you to later relive it as if you were standing there.

Here are three tricks to deal with it.

The first one to make a selfie. Smile to the camera or make postures. Such an interactive panorama will seem to be more interesting.

The second one is to make yourself part of the storytelling, for example, in google street view shooting. You can act as the passenger among the crowd, the customer who enjoys the coffee, or the father who plays with the kids.

The third one is to hide yourself, for example, in virtual tour or real estate shooting. Set the timer, or use the WiFi/Bluetooth remote controller to trigger the camera, so you have enough time to run far away, or hide behind a car, rock, or tree.

When shooting 360 photos or 360 degree video, anything closer than one foot from the camera is at risk of suffering from stitching problems.
For example, when standing on a stitch line, objects and people seem to disappear right around the stitch line. They may get broken faces or distorted body. Thus, try to avoid the stitch line especially when you take group photos.

In sunny days, auto mode of the 360 camera is your best friend. Unfortunately, if there is no enough light for interior shots or the weather gets bad, most 360 cameras fail to deal with the low light conditions. In this situation, play with the manual settings, and change iso, shutter speed or ev. There will be a huge improvement over auto mode.

9. Say Goodbye to the Stabilizer

With traditional film, you will need a gimbal or stabilizer to get super-smooth footage.

This isn’t the case with 360 cameras. For example, QooCam‘s 3-axis built-in stabilization has solved the camera shake and rolling shutter phenomenon. Without great investments in gimbal, you can still get super-smooth video for vr content by just holding the camera. Running, skiing, biking, hiking, walking the dog…Capture moments just as you experience.

10. Be Careful with the Distance to the Camera in 3D

When 3D cameras first come out, what impresses people most is the immersive VR experience. The 3D depth gives you a real-life sense as if it was happening.

Currently, there are two kinds of 3D videos, one is full 360 spherical video and the other is 180-degree wide-angle view VR video (side by side or VR180 format). No matter which one you choose, you will need VR headsets, through the Facebook 360 app for Oculus Go or Samsung gear VR for the ultimate viewing experience.

However, the safe distance rule also applies to 3D virtual reality video, which is often forgotten by most people during shooting.

If the objects or subjects are too close to the cameras, when viewed in VR, you may feel uncomfortable. The camera lenses are like the viewers’ eyes. Too close will distort the 3D effect or even make the viewer feel their personal space is being invaded.

Another way to solve the VR sickness problem is to avoid moving the camera too much. Indeed, take a dog’s perspective to film VR 3d videos can be interesting. However, when people watch on google cardboard or VR headsets like oculus rift, htc vive, the roller-coaster effect is likely to happen. The movements are too much for some people and result in VR sickness.