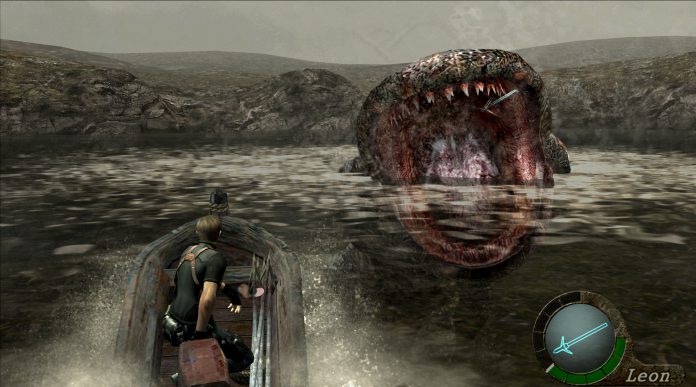 I can’t decide if it’s brave or cowardly to be afraid of something in videogames that I wouldn’t be afraid of in real life. I’m not sure it’s a trait anyone else shares, but I’m terrified of water in virtual worlds and have no such concern about it in reality. My fears can be traced back to the original Star War: Jedi Knight, in which I distinctly remember diving into a river only to discover some hulking beasts lurking below the surface that were made unintentionally frightening through their jagged, now-dated graphics. Weighed down by water, I was forced to watch as the brutes surrounded me and essentially beat me to death.

I’ve carried that memory and many others – Resident Evil 4’s lake battle and Jak & Daxter’s man-eating fish swim to mind – throughout my gaming career. The alien appearance of any marine life mixed with the inability to move away from it as fast as possible is the quickest way to send me into a panic. I was not crazy, then, about the idea of experiencing that all over again in virtual reality (VR). This is, after all, gaming taking a step closer to real life, and I have no desire to link my virtual traumas with real ones.

That’s why I had to reassure myself when I pulled on an Oculus Rift to try out Minority Media’s Time Machine VR, now available in Early Access and coming soon to the Oculus Tift and HTC Vive’s launches. I had to tell myself that this was meant to be an explorative, somewhat educational experience in which I could calmly study prehistoric sea life. Surely there was nothing that was going to jump out at me from behind weeds or out of caverns. Sadly, I was wrong.

For the first 20 minutes or so, Time Machine VR relies on the impressive sense of fascination that comes with virtually travelling back in time and investigating creatures that you would have never even known existed. You’re taking a closer look at turtles and introducing yourself to the insides of a much larger beast, which is a sight to behold to say the least. In the title’s second mission, however, you’re literally thrown in at the deep end. It’s here that you’re tasked with hunting down and studying an eye-widening monster, the Pliosaurus. 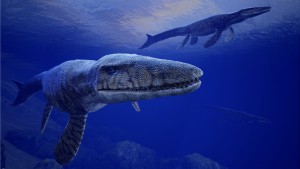 The loading screen for this mission didn’t do much to calm my nerves; a hologram in front of you shows the sheer scale of the beast by comparing it to the size of a human, which it dwarfs with ease. My eyes couldn’t help but trail is enormous jaws as my A.I. companion informs me that the Pliosaurus was one of the top predators of its time based on its sheer size. Great.

Following some caverns into a large area, I found, to my horror, three of the creatures swirling overhead, casting shadows through the light, seemingly mocking the pathetic specimens that reside below. Occasionally, they’d swoop down lower in search of something smaller to devour. I qualified in such a bracket, and I was all too aware of that.

I want to stress at this point that Time Machine VR isn’t a horror videogame by any stretch of the imagination, and you shouldn’t think of it as such. You could probably play through this section without breaking a sweat. This is purely a personal fear but, for the life of me, was I afraid. VR made these animals about as intimidating as they could possibly be; I felt the weight of the ocean above me as the snaked around, either vicious eyes carrying a mad tint to them. 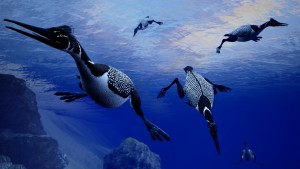 My only sanctuary was a sort of house of rocks centred in the middle that I was told a Pilosaurus wouldn’t intrude on. As such, this became a game of summoning the bravery to rush outside, scan one of these horrifying nightmares (again, this is me being a coward) and rush back to safety.

The first few attempts were a success. I’d gulp, dart out of the safe zone, freeze time – a mechanic dictated by a short meter – and bite down into my lip as I scanned the necessary area and then scampered by into the rocks, the large stone roof casting a shadow that felt like a safety blanket. It was the fourth time I had to step outside that things didn’t go to plan.

Put simply, the meter ran out while I was still far out from the rocks and hadn’t yet finished scanning. The result? I squirmed in terror as the Pliosaurus circled around me and then pounced, its horrendous jaws coming straight for me. VR hasn’t made me flinch much, but that was definitely a moment in which I cowered. The sense of relief that followed when reminding myself that I hadn’t actually just been chewed in half, was quite something. Still, I distinctly remember those few seconds of panic in which, thanks to VR, I really believed I was about to be eaten.

Time Machine VR is going to be something of a challenge for me to see through, then, but it’s definitely something I want to do. VR is capable of intensifying all kinds of emotions, and we should embrace each and every one, even the negative feelings. There may be some real horror titles coming to the Oculus Rift and HTC Vive, but Time Machine VR is the one I’m most afraid of.

The post VR Moments: How A Trip Into Time Machine VR’s Prehistoric Seas Left Me Drowning In Anxiety appeared first on VRFocus.