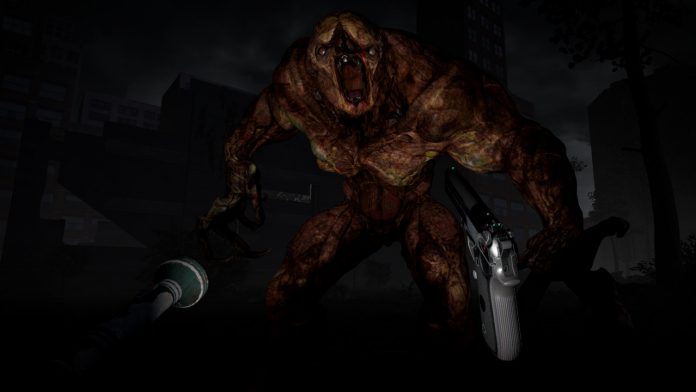 It’s getting difficult to keep track of all of the videogames that will be coming to the HTC Vive virtual reality (VR) head-mounted display (HMD) as it finally starts to ship to consumers next month. Developers are flocking to the device with new experiences that make full use of its Room Scale user-tracking and position tracked controllers. One such developer is Phosphor Games. The studio will be bringing its horror-based first-person shooter (FPS), The Brookhaven Experiment, to the kit shortly after launch.

The Brookhaven Experiment is set in a ruined world in which an incident referred to as the ‘Experiment’ creates a hole in reality. This has caused vicious, horrifying monsters to appear, which players must fight off with weapons that will be handled realistically thanks to the tracked controllers. Phosphor Games describes the piece as a ‘situational horror’ in which players must manage supplies and upgrade items in order to survive a series of encounters that will lead them back up to the incident itself, which they can try and put a stop to.

“As a developer on the Left 4 Dead series, we always tried to put you into the action – we wanted you to be there,” Chet Faliszek of HTC Vive co-creator Valve said of the title. “The Brookhaven Experiment does this in a way we never could in a traditional FPS and the results are horrifying.”

A Steam page for The Brookhaven Experiment is now live and confirms that the title will launch on 26th April 2016, a few weeks after the HTC Vive’s own 5th April shipping date. A demo can also be downloaded now, ready for when your kit arrives. It’s possible to pre-purchase the title for 25 percent off right now, pricing it at £11.24 GBP inside of £14.99/$19.99 USD. The title will also be on display at Valve’s own booth at the 2016 Game Developers Conference (GDC) next week.

Stick with VRFocus for the latest on The Brookhaven Experiment.