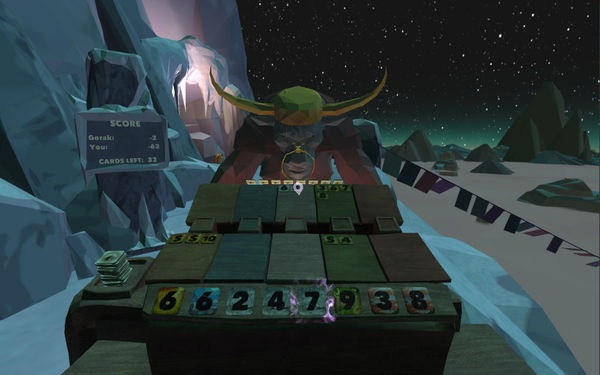 Having its first public showcasing this week at the 2016 Mobile World Congress (MWC) in Barcelona, Spain is Lost Cities Virtual Reality Edition, a VR adaptation of the award-winning tabletop game Lost Cities by world-renowned board game designer Reiner Knizia.

Lost Cities Virtual Reality Edition has been developed by The Campfire Union, a VR studio and VR platform provider based in Winnipeg, Canada. The title is due for release next month on the Samsung Gear VR head-mounted display (HMD).

The game consists of 60 cards, separated into 5 expeditions, these are Desert Sands, Neptune’s Realm, Himalayan Mountains, Ancient Volcano, and Brazilian Rainforest. Each expedition consists of 3 investment cards and the numbers 2-10 for a total of 12 cards in each. The point of the game is to finish the game with a higher score than your opponent. Each player is dealt 8 cards, and points are earned by playing cards on a player’s expedition.

Lesley Klasson, Chief Innovation Officer of The Campfire Union, said in a statement: “The Lost Cities board game is great, which is why it’s achieved cult status, but the experiences in the board game are quite abstract.  Apart from the colour of the cards, there’s no real difference between the Himalayan mountains or the Brazilian rainforests.

“That’s where the VR experience really comes to the fore, adding a new layer to the game play – players can look up from the cards on the table and through their VR device to see amazing scenery, and be surrounded by the sound of crunching snow on those mountains or the howls of the creatures in the rainforests.

“Most tabletop games for one reason or another present substantial challenges in being adapted to VR – such as too many pieces to select and move, legibility issues on current VR screens, requiring 3-5 players, and so on.  Lost Cities is a perfect fit.”

VRFocus will continue its coverage of Lost Cities Virtual Reality Edition, reporting back with the latest announcements from the developer.

The post VR Board Game Lost Cities Gets World Debut at MWC appeared first on VRFocus.