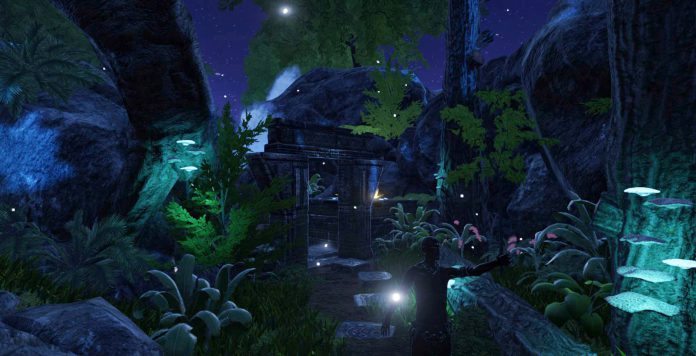 Oculus VR has its own line-up of virtual reality (VR) titles that it’s currently showcasing for the launch of the Oculus Rift head-mounted display (HMD) in the first three months of 2016. But looking beyond those titles reveals a flood of other videogames that are also coming to the device either at launch or shortly thereafter. One such title is the anticipated XING: The Land Beyond from indie team White Lotus Interactive. Recently the developer assured VRFocus that it is ‘doing everything’ it can to support the device when the title launches next year.

White Locus Interactive Co-Founder James Steininger confirmed as much in an interview that will be published later in the week. “We’re coming up on almost three years of development on XING: The Land Beyond,” Steininger explained. “We are actually close to release, we have an announced release of Spring 2016. Virtual reality is a big part of our game, so we’re trying to ride the crest of that wave. And we hope to please our fans who are wanting to play XING in virtual reality, definitely.”

When asked if the Oculus Rift would be supported in the launch version of the title the developer replied: “PC and the Oculus Rift are our primary launch target and we are doing everything we can to hit Oculus at launch.”

XING: The Land Beyond is a first-person adventure title set in the afterlife. Players will travel across time, visiting the past lives and events of four different characters, encountering a range of puzzles that they must solve as they go. The title ran a successful Kickstarter crowd-funding campaign all the way back in 2013, where the team even managed to reach a stretch goal for the Oculus Rift support. Since then White Lotus Interactive has incorporated the project into Epic Games’ Unreal Engine 4. Support for other HMDs such as the HTC Vive is yet to be confirmed.

VRFocus will continue to follow XING: The Land Beyond closely, reporting back with the latest updates on its progress.

The post VR a ‘big part’ of XING, Dev ‘doing everything’ it Can to Hit Oculus at Launch appeared first on VRFocus.