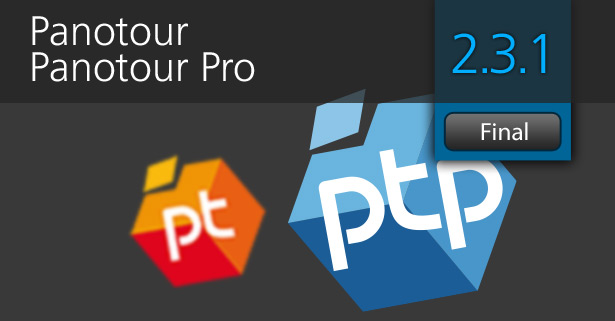 Kolor has just released a new version for Panotour / Panotour Pro, the virtual tour creation software.
This version 2.3.1 fixes several bugs for both MacOS and Linux versions.This new version is of course free for all Panotour 2.x users, please consult the change log below if you want to know more.

We upgraded the graphical library used by Panotour/PanotourPro on MacOS.

The refresh of the graphical interface should now be faster.

Some crashes that happened on MacOS may be fixed now as they seemed to occur in some display processes that are not called anymore, but as we never reproduced them, we cannot ensure it.

Yosemite support is still in progress. Main features of the interface are working now, but Fullscreen for example is still buggy.

This version fixes a major issue on Linux. Users do not have to register every time they run Panotour/PanotourPro any more.

If you faced some crashes on Windows 32bits, this version may not fix them. We are still working on this major issue.

HTML samples have been enhanced

If you used some custom templates found on the sample page (http://www.autopano.net/wiki-en/action/view/Panotour_Pro_2_-_HTML_Templates#EXAMPLES_OF_CUSTOM_HTML_TEMPLATES) or if you created your own HTML template based on those samples, then you should download the new ones.

MacOS X Yosemite will be supported in Panotour Pro 2.4 release.

Panotour/Panotour Pro 2.4 version when released will run on :

– 0004196: [Tour] Autorotation/Autotour problem when linked with plugins with opened, closed and open at start states

– 0004170: [Tour] Tooltip stay on cursor position when a blocking animation is launched

– 0004164: [Tour] Description plugin : description is opened on each new pano even if closed when respond to show/hide controls effect

– 0004158: [Tour] Correct the orientationchange issue on iPhone with white line