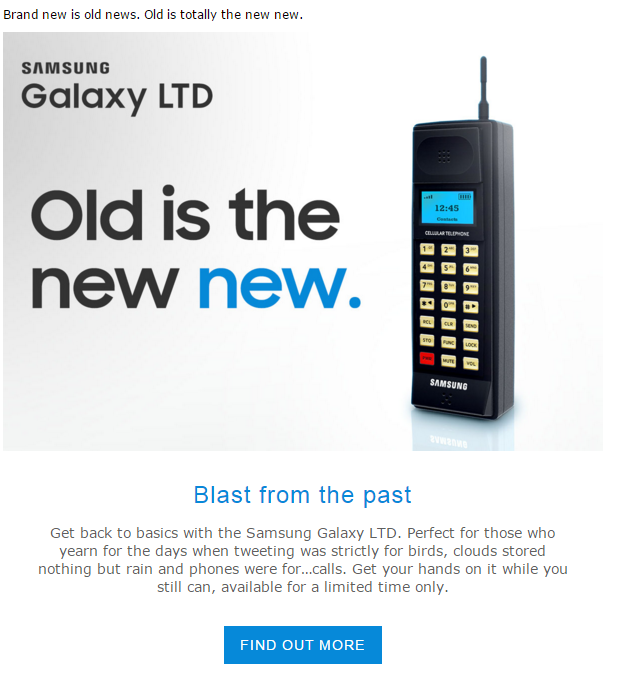 April 1st is here, and you know what that means. Yes it is another chance for people across the world to try and trick, prank, confuse or in any way possible fool one another. For a news site this is a bad time – well, if you’re not doing the pranking yourselves – as inevitably some outlets will have big announcements on April 1st regardless of what is going on and you’re then left with trying to discern whether or not the news is new or some elaborate forgery. Whilst cackling marketing and PR departments throughout the land mail you “urgent” Press Releases.

Whilst we’re not doing a fool ourselves, we did think you’d enjoy a roundup of all the fools good and bad that we had received with some extracts from the relevant press releases and activities.

The best fools always have a grain of truth to them and previously there were there have previously been rumours that Google were in fact looking to develop another HMD. A successor to Cardboard and one that would potentially rival Samsung’s Gear VR.

It looks like Google took the rumours to mind when creating their April Fool – The Google CardboardPlastic.  “It’s our latest step toward truly immersive technology—a new viewer that lets you see, touch, smell and hear the world just like you do in real life.” Says the official blog. You can see an official trailer for the ‘announcement’ below.

It’s nice to see that Augmented Reality wasn’t forgotten. This breakthrough sees the classic nervousness suggestion of “imagine the audience in their underwear” taken to its technological extreme.

“Nervous public speakers who have long been advised to “picture the audience in their underwear” can now do so with ease, thanks to a new augmented reality (AR) application unveiled today by experiential marketing agency Cramer.

The product, Speak EZ-AR, is the first ever AR application designed to help those challenged by public speaking overcome their fears. Donning stylish AR glasses, users can change the audience into whomever – or whatever – makes them most comfortable. Because this may mean different things for different people, speakers can choose from a number of nerve-calming menu options, such as “Audience in Underwear,” “Just Your Mom,” “Audience is Richard Dreyfuss,” “Kittens,” and more.”

No Shia Labeouf mode though. Shame.

Samsung also got in contact with us to let us know about their latest phone, the Samsung Galaxy LTD. A special phone looking for design influences from the era of the 1980’s. Which is of course confusing because today is Friday and as you all know Throwbacks are for Thursdays. Clearly someone messed up here.

There’s no information as to how the Galaxy LTD will be compatible with the Gear VR, though I would assume ‘with difficulty and rubber bands’ would be the answer. You can find out more about the product critics are already calling ‘a phone’ here.

There is nothing the Internet likes more than cats and VR is a hot property right now. So what do you do? You create a new website, add cats, add virtual reality, stage three = ??? and profit. In fact you become so successful that mainstream sites want you.

“Pets.com® today announced that they have acquired CatsAndVR.com, the fastest growing site covering Cats and VR this month. The rapid growth of the lifestyle brand has been a shock to everyone but CatsAndVR.com CEO Neranjan Bobby Venom. “We are thrilled to be part of the Pets.com family and to help with their rebranding efforts. “They are sitting on such a good domain I am glad they brought us on to help them rebrand in a post post dot com bubble burst era.”

“Browse the net in VR, as was always ended” was the subject line on this particular email that made its way into VRFocus’ inbox. Let’s be honest the most annoying part of virtual reality is the headsets themselves. Isn’t there an easier way to immerse yourself in VR? Of course there is – get rid of them completely.

In a move that finally elevates the experience of surfing the web to the conceptual highs first envisioned by sci-fi and cyberpunk literary visionaries, VRDB.com has announced that it has developed virtual reality support for the web.

Premiering exclusively on VRDB.com but available on any site using a bookmarklet (reddit, google etc), this new VR mode for the web will allow you to immerse yourself without the need for any of the expensive, recently-launched new generation of VR headsets, such as the Oculus Rift and HTC Vive.

“We are finally able to deliver an immersive, stereoscopic 3D internet experience,” says Scott Reismanis, founder and CEO of VRDB parent company DBolical Network. “As is the standard for VR, we will be rendering our webpages at a rate of at least 90 frames-per-second, which should all but eliminate undue motion sickness when scrolling both up and down.

Sent to us through the PR newswire; Go Ape announced the launch of world’s first 4D treetop adventure experience.

NOTE: THIS NON-FACTUAL NEWS RELEASE IS ISSUED BY GO APE AND IS AN ACKNOWLEDGED SPOOF FOR APRIL FOOL’S DAY.

Well, you rather spoilt in now.

Go Ape Treetop Couch will come pre-packaged with its custom made 4D goggles, equipped with pine-scented air fresheners and a fan to recreate the feeling of the air rushing by as you ride a zip line or swing through the trees on a rope.

I must admit to being curious as to how 4D goggles work in practice. The sad thing is that actually sounds like a decent idea for an app, swinging from tree to tree in the jungle.
That’s all for now, but there is certainly plenty of other VR related pranks out there. Be careful for the rest of the day as you can never be sure if what you’re reading is truly real or not on April 1st.