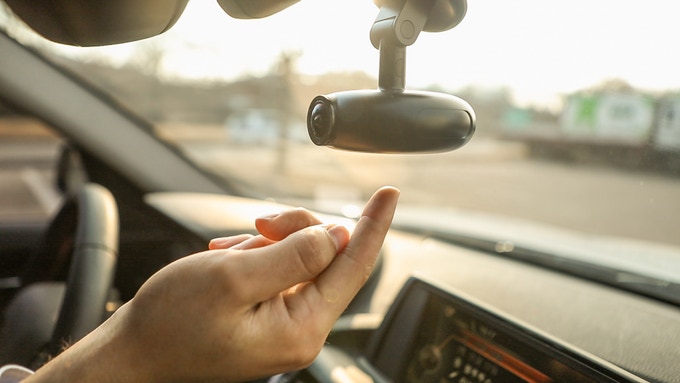 
Vezo 360 is an AI-equipped 360 camera dashcam.   Besides recording 4K 360 video, its AI can alert drivers who are getting drowsy.

Vezo has two fisheye lenses with f/2.0 aperture and uses backside-illuminated 1/2.3 inch sensors.  According to their crowdfunding page, the Vezo records videos at a resolution of 3540 x 1920 in H.265 codec.  If that is not a typo, the resolution is unusual because it doesn’t follow the standard 2:1 ratio for equirectangular video.

Here’s a sample video of what Vezo captures:

Capacity: Vezo 360 can accommodate Micro SD cards up to 256GB.  In addition, it features loop recording, which means it will record until the memory card is full and then record over the oldest portions of the video.  The camera also detects accidents, in which case the camera will automatically lock the footage to prevent it from being erased until you extract it with the Vezo app.  It also has an option for cloud storage.

Vezo 360 also has Wi-Fi and 4G support.  It can not only connect wirelessly to your smartphone, but can also send you live notifications of suspicious events while the car is parked.  The manufacturer says the 4G support is optional, so it’s not clear if this means you’ll need to get a separate wireless plan for it.

Vezo 360 comes in two versions: a standard version ($179), and an AI-equipped version ($229)which can detect when the driver is getting drowsy and emit an alarm.

Vezo 360 is available on their Indiegogo page for delivery in September 2019.  Please note that as with any crowdfunded project, crowdfunding is not the same as ordering.  The product can be delayed, or in the worst case scenario, they might fail to deliver the product with little or no recourse for “backers.”  Meanwhile, I’ll request them to send a unit for testing.

Thanks to 360video.it for bringing this to my attention!