At Unite Europe today, Unity Technologies announced a change in the pricing plans for the popular videogame engine Unity 5. The new tier structure is aimed at encouraging independent developers to work with the engine whilst not restricting larger business. All versions of Unity 5 will now include Android and iOS Pro add-ons as standard with no additional costs.

“It’s harder to be successful today. Market is larger, consumers are spending their time in different ways. Mobile is in the ascendancy, console and PC need bold creativity and VR/AR is in a pioneer moment. Against this, Unity isn’t as accessible as it could be – a core product with add ons for a larger up front price and upgrade fees every 2 or so years didn’t seem to be cutting it,” states a post on the official Unity Technologies blog. “So, we wanted to simplify. We wanted to give more value. With our three new products we’re confident we have increased the ability for you to reach the largest audience, provided increased no worry access to the latest tech and made Unity more affordable.”

The new tier system, as detailed by Unity Technologies, follows below:

Personal stays as it is. Free and fully featured. It’s democratization of development at it’s best. Revenue or funding cap of $100k per year.

An all-new version of Unity, designed for individuals and teams that need more optimization to release commercial games and interactive experiences. Plus comes with the same revenue cap as Personal, $100k per year.

Unity Pro – $125/month with one year commitment, no revenue cap.

The new and improved version of Unity Pro for professional individuals and teams who need complete flexibility for creating commercial games and interactive content.

For large organizations wanting source code and enterprise support. Unity Enterprise is purchased through a Unity representative, pricing upon request. In addition, we will be offering pay to own Pro products for customers who want to keep their version of Unity at the end of their subs period.

Unity Technologies state that they’ll beginning reaching out to specific groups of customers to discuss the new pricing plans this month. All subscribers may stay on their existing plan until June 2018. An infographic highlighting the assets available in each version of Unity 5’s subscription plan follows below and VRFocus will keep you updated with all the latest details on this hugely popular videogame engine’s virtual reality (VR) assets. 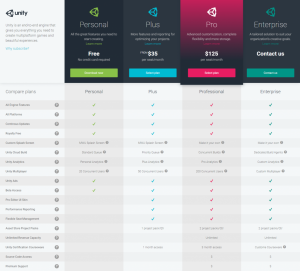