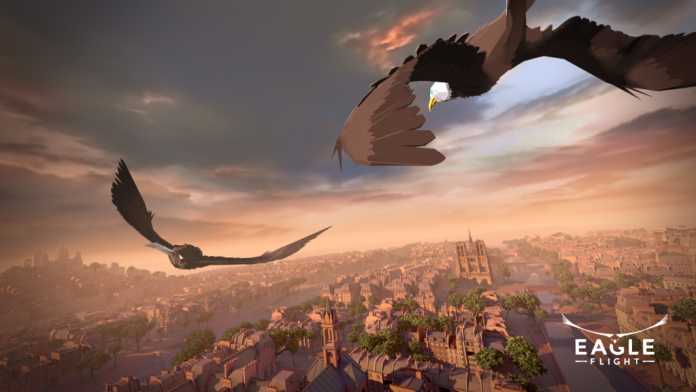 Developer Ubisoft has certainly wasted no time throwing itself into producing videogame titles for virtual reality (VR). At this year’s Electronic Entertainment Expo (E3) in Los Angeles the company confirmed that it would be releasing four VR titles this year for Oculus Rift, HTC Vive, and PlayStation VR. The titles coming this year will be  Eagle Flight, Trackmania Turbo, Werewolves Within, and Star Trek: Bridge Crew, with plans to bring out a VR compatible Just Dance at a later time.

Ubisoft is clearly embracing VR technology by building experiences specifically for the hardware and it used its conference as well as the show floor at E3 this year to show off some footage from its upcoming titles. Eagle Flight is one of the more widely discussed VR titles in the company’s line up, bearing some resemblance to non-VR titles in the Ubisoft’s library such as Assassin’s Creed. In Eagle Flight players control an eagle that’s flying through the streets of a deserted Paris. There will be both single and multiplayer modes with missions that will involve ring parkour and ring challenges as well as exploring to find hidden areas and important collectibles.

Ubisoft streamed some gameplay from the title’s multiplayer mode during its E3 conference and now more screenshots have been released that showcase just how beautiful the videogame will look. The screenshots show the eagles from the game flying over a warmly lit Paris and swooping through its streets where the human population appears to have been replaced by frolicking deer. No one can say Ubisoft doesn’t make an effort when it comes to rendering cityscapes. 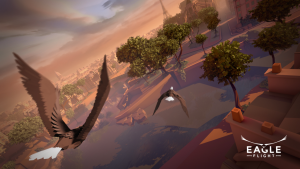 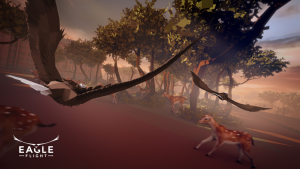 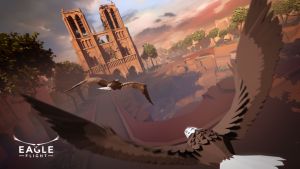 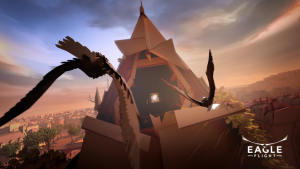 Eagle Flight doesn’t have a firm release date just yet, though we do know it’s set to launch in Autumn of this year. VRFocus will report back with updates as they’re announced.