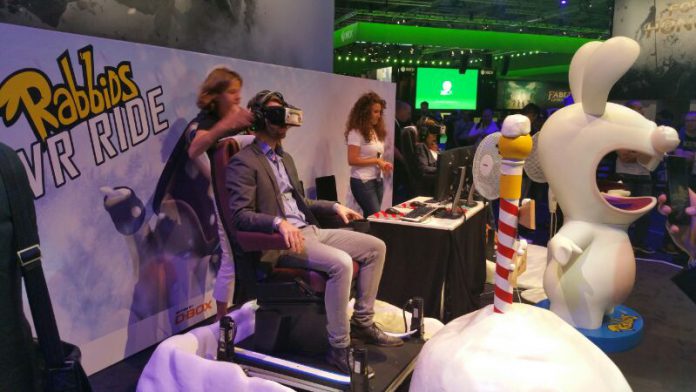 As virtual reality (VR) continues to grow in promise a number of high-profile videogame publishers have pledged support for the technology. One such publisher is Ubisoft, the company that only last year said it would need to see sales of 1 million units before it would consider work in VR. The Assassin’s Creed publisher has since revealed early experiments with the technology and even some support for some its upcoming titles. Some of that support will be on display this week at Paris Games Week (PGW) in France.

Firstly, Ubisoft will again be showcasing the Rabbids VR Ride that’s been on display at several events throughout the year. But that’s not all the company has on display. Trackmania Turbo, the physics-defying racing videogame that was revealed to support VR at E3 this year, will also be on display. In fact the title will be hosting a VR competition of some sort later in the week, though official details on this are yet to arrive.

Ubisoft’s efforts are far from all that are on display in terms of VR at PGW. Sony Computer Entertainment (SCE) has brought its PlayStation VR head-mounted display (HMD) to the show and Valve and HTC have the HTC Vive.

VRFocus will continue to follow Ubisoft’s work in VR closely, reporting back with the latest updates on its progress.