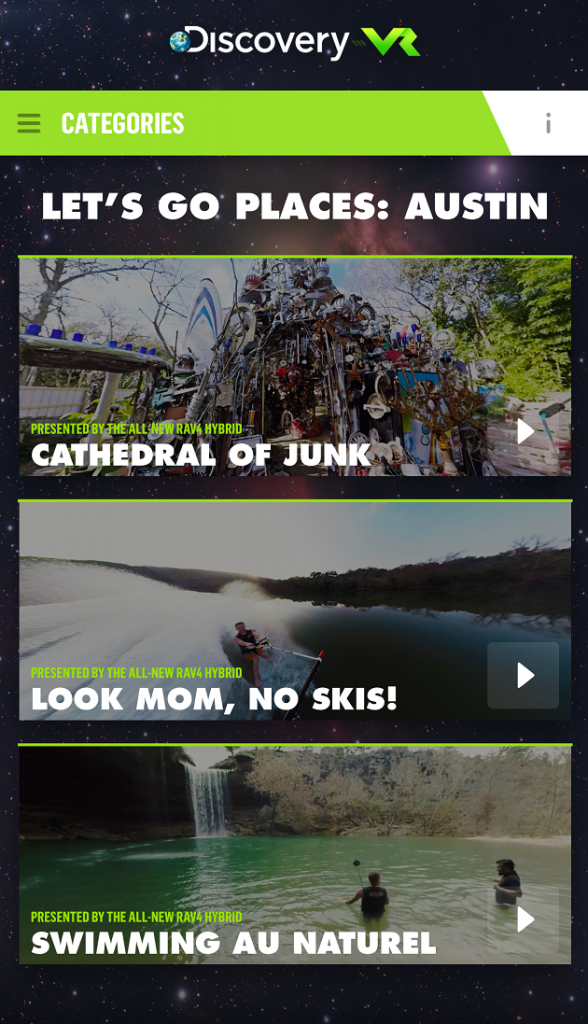 The 10-episode VR series will transport audiences to unique experiences and attractions in and around Austin, Texas with Brian Brushwood and Justin Robert Young as their guides. Virtually traversing the area in a Toyota Rav4 Hybrid viewers will experience barefoot waterskiing on Lake Austin, a visit to the Natural Bridge Caverns, a Barton Creek drum circle and a visit to the local Cathedral of Junk.

“Toyota is incredibly excited to partner with Discovery to deliver truly ground-breaking, digital content featuring the new RAV4 Hybrid,” said Dionne Colvin-Lovely, Director, Traditional and New Media, Toyota Motor Sales, U.S.A., Inc., in a statement. “As virtual reality becomes ever so prevalent in the advertising space, it’s a natural fit for Toyota to utilize the technology in ways that allow our fans to explore the world around them with a simple click of a button.”

Let’s Go Places: Austin can be found across Discovery VR’s platforms, DiscoveryVR.com as well as iOS and Android apps. For those without headsets like Google Cardboard, 360-degree experiences are available on Discovery Channel’s Facebook page and YouTube channels.

“Discovery Communications prides itself on bringing innovative, engaging and impactful solutions to its partners, with a focus on world-class native offerings,” said Harold Morgenstern, Senior Vice President, Digital Ad Sales, Discovery Communications. “As a leading storyteller in the virtual reality space, we are thrilled to team up again with Toyota to bring audiences on the road and immerse them in everyday adventures as only Discovery and Toyota can.”

VRFocus will continue to bring you the latest VR experiences from Discovery, as new projects are announced.