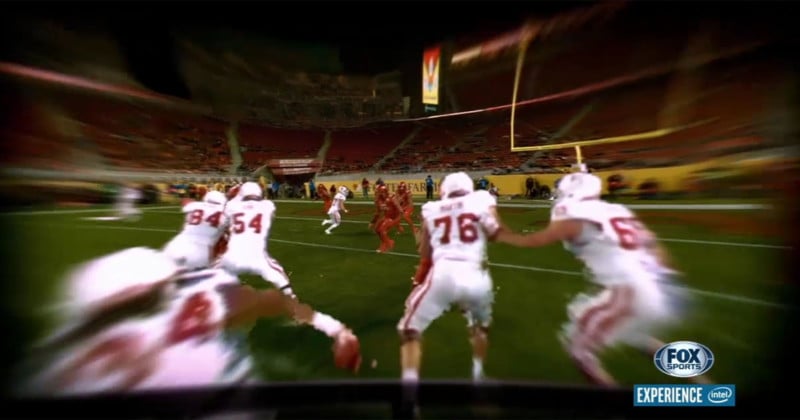 This year’s Super Bowl will be the first to use high-tech camera technology to offer a never-before-seen view: a look at plays through the eyes of players.

FOX Sports announced today that it’s teaming up with Intel to bring a new Player’s-Eye View to Super Bowl LI. What’s unique about this new view is that it won’t be captured with small cameras worn by the players (like with FOX’s referee GoPro cameras).

Instead, the feature will use Intel’s 360 Replay technology, which utilizes a large number of cameras circling a stadium. Using the images captured by these cameras, FOX Sports’ “Be the Player” enhancement will generate a point-of-view perspective from any player on the field.

For a taste of what you’ll see during the Super Bowl, take a look at this use of the player’s eye view during a college football game this past season between Indiana and Utah:

“We tasked Intel to push their amazing Intel 360 Replay technology to the limit of what it could do, using their array of cameras circling the stadium to synthesize a player’s view on the field,” says FOX Sports SVP Michael Davies. “The cameras, backed up by a huge bank of Intel computing power, allow a moment to be recreated in 3D space, so that a ‘virtual camera’ can be placed at the player’s eye line — not unlike how limitless camera views can be created in video games.”

“It literally brings the audience down to the viewpoint of the player at the critical decision-making moment,” Davies continues. “What other choices did he have? Was his sight blocked? It all looks much different from field level…”

If you’re planning on watching the Super Bowl on Sunday, February 5th, 2017, keep your eyes peeled for the new “Be the Player” view to see what can be done now by combining and crunching static 360-degree photos.

(via FOX Sports via Engadget)