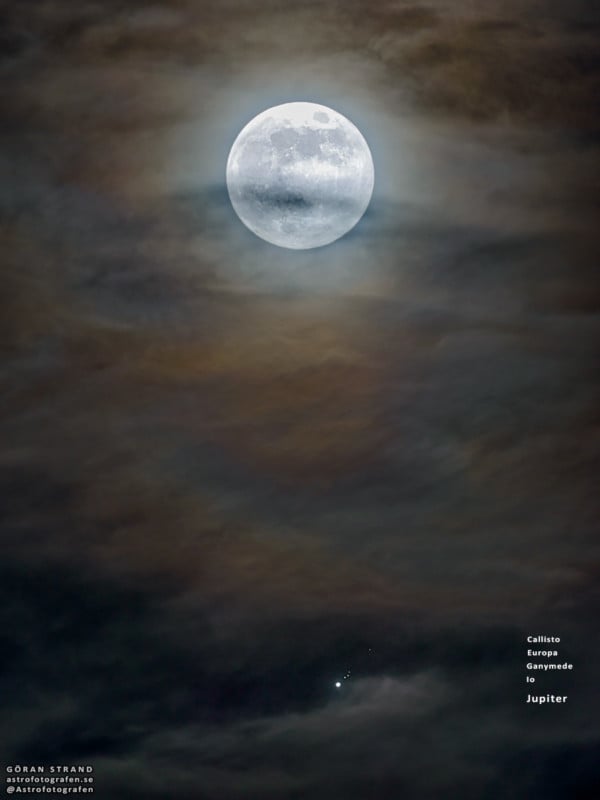 On April 10th, 2017, there was a special meeting in the night sky: the Moon was seen close to Jupiter and Jupiter’s four largest moons, known as the Galilean moons. Photographer Göran Strand went out and captured the beautiful photo above of the entire group in a single frame.

“It’s a very beautiful sight in the sky tonight with the Moon and Jupiter so close together,” the Swedish astrophotographer writes. “At the time for this photo (19:33 UTC) they were 1°45′ apart.”

At the bottom of the frame, from top to bottom, we see Callisto, Europa, Ganymede, Io, and Jupiter.

Strand says that since there was some cloud cover that night, he was able to wait until the moonlight was partially blocked by clouds so that he could expose for Jupiter and its moons.

“Closer and brighter, our own natural satellite appears to loom large,” writes NASA’s Astronomy Picture of the Day, which featured Strand’s shot. “But Callisto, Ganymede, and Io are physically larger than Earth’s Moon, while water world Europa is only slightly smaller.”

And here’s another interesting fact they point out: in this one photo, Strand captured 5 of the 6 largest planetary satellites in the Solar System — only Saturn’s moon Titan is left out of the shot.