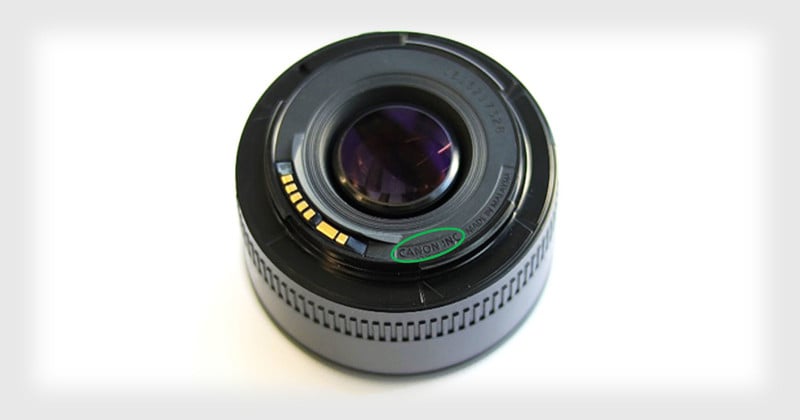 It’s not just memory cards that are widely counterfeited in the photo industry: there are plenty of fake cameras and lenses floating around as well. Now Canon wants you to know about a quick and easy way to see if your 50mm f/1.8 II lens is a knockoff.

Canon, which reported that 18% of people unknowingly purchased counterfeit goods in 2013, writes that technicians at its international service centers have noticed counterfeit versions of its popular 50mm f/1.8 II (the “nifty fifty”) being sent in for repair.

“These ‘counterfeit goods’ are illegal displays of Canon’s logo, trademarks, etc., and they are not designed or produced by us,” Canon says.

While the knockoffs are largely identical in appearance to the authentic Canon products, there are small differences that can instantly tell you that you’re dealing with a fake.

For whatever reason, counterfeit Canon 50mm f/1.8 II lenses have been found to be missing a space between the “CANON” and the “INC.” found on the plastic lens mount at the back of the lens when the rear dust cap is removed.

This is just one widely reported difference that Canon has found so far. So if you’re comparing same lenses with a friend and notice a slight difference in the designs, one of them might not be genuine.

To ensure that you’re purchasing authentic camera gear, make sure you purchase it from reputable retailers.

(via Canon Japan via Digicame-info)