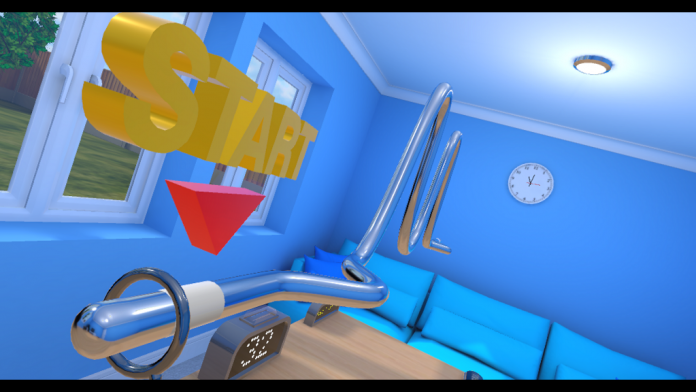 For indie virtual reality (VR) videogame developers Steam Greenlight can be one of the best ways to get a project noticed. One of the latest to get Greenlit on the service is The Wire Loop Game VR from Mobile Fusion VR.

Based on the classic children’s toy, whereby users have to move a metal ring along a metal wire course without either of the two touching, it’s a game of patience and concentration. This VR version looks to be just as challenging as the real-life versions, with 50 courses currently built.

Supporting the HTC Vive head-mounted display (HMD), The Wire Loop Game VR uses just one of the headsets positional-tracked controllers to play. The videogame has been designed to use the HTC Vive’s Room Scale feature so that gamers can stand up to comfortably play, and there’s also height adjustment for the wire depending on how tall each person is. Adding some tension to the title is a timer for each course, meaning a steady hand is required to complete every level.

The Wire Loop Game VR has a listed release date of July 2016, at which point it’ll likely head to Steam Early Access as most Steam Greenlight tend to titles do. This process helps build funds for developers (if they’re charging), and community feed back.

If you’ve been reading VRFocus or headed to Steam recently you’ll not have missed the massive summer sale that’s currently going on until 4th July. It’s the first big sale event for the HTC Vive HMD, with over 100 titles discounted between 20 – 70 percent off. Steam’s sales are notorious for tempting gamers to build up their collection, and even with VR being a fledgling technology, there’s a decent selection of titles to choose from.

VRFocus will follow the progress of The Wire Loop Game VR, reporting back with any new updates.