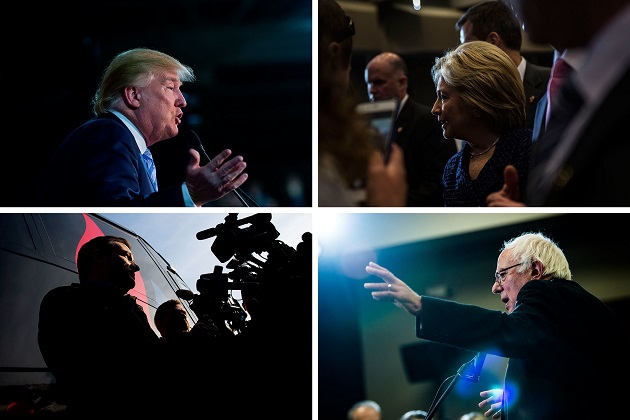 Since The New York Times released its Google Cardboard compatible app NYT VR back in November 2015, several 360-degree short films have been added to its content roster. These include The Displaced and Take Flight, both made in collaboration with virtual reality (VR) production studio Vrse.works. Today sees the arrival of a new film The Contenders, taken from footage of the presidential campaign over the last month.

The film takes viewers up close and fully immersed amongst the constituents at the pre-caucus events of Ted Cruz, Bernie Sanders, Donald Trump, and Hillary Clinton. Trump was filmed in Florida, the others in Iowa. From the large scale arenas that Trump holds his rallies in, to the more intimate surroundings of a local restaurant that Cruz prefers, the film casts a light not only on the participants but those supporting them.

Each event is filmed in full 360-degrees from several viewpoints and features a narration on the people, their attitudes and the focus of each of the candidates. The app also links through to an accompanying article by a political correspondent for The New York Times and their impressions.

The NYT VR app can be downloaded on iOS and Android for free and can be used with a mobile head-mounted display (HMD). For those without a headset there’s a standard smartphone option that allows users to move their device around, or swipe the screen to view the film.

VRFocus will continue to bring you the latest VR content released on the NYT VR app as its released.