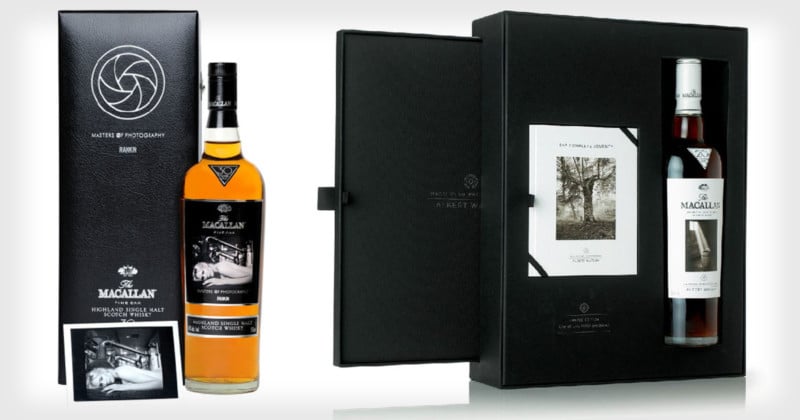 Since 2008, the famous scotch whiskey distillery The Macallan has been slowly releasing a limited edition series of whiskies called Masters of Photography. Each of the editions involves a partnership with a famous photographer as a way to feature their work.

The 6th release was just announced this week, and features American photographer Steven Klein. Here’s a rundown of what the 6 releases have contained for scotch and photography enthusiasts so far: 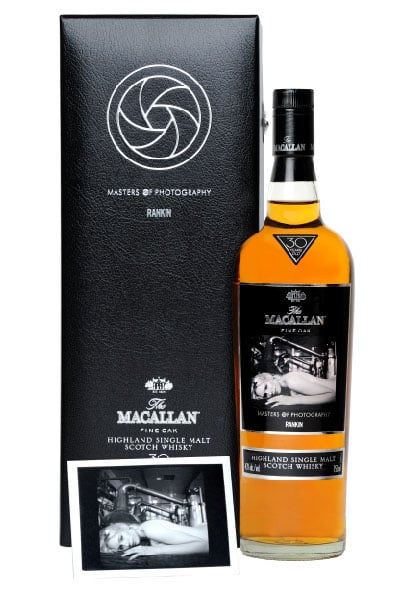 For the first Masters of Photography release, Rankin shot 1,000 single-edition Polaroid pictures for the 1,000 boxes of whiskey, “the first time 1,000 totally individual and original objets d’art had been introduced by one brand,” Macallan says. The photos were shot at the Macallan Estate, and many of them are nude studies of Tuuli, Rankin’s muse.

The scotch was a Fine Oak 30 Years Old. The Polaroid picture and scotch were presented in a velvet-lined black leather box. Each of the 1,000 bottles had an individually printed label that matches the Polaroid it’s paired with. There’s also a booklet of authenticity signed by Rankin. “With platinum metals being more stable than gold, a platinum image, properly preserved, can last thousands of years,” Macallan says.

The whisky was a Macallan Sherry Oak 20 Years Old featuring a specially commissioned label by Watson and a set of 10 portfolio prints. Celebrity portrait photographer Annie Leibovitz did a photo shoot in New York with Scottish actor Kevin McKidd for her release. A total of four portraits were made at a library, gallery, bar, and skyline.

The 1,000 bottles produced for this release comprised four one-off single cask whiskies, each paired with one of the 4 portraits Leibovitz created. Erwitt was commissioned by Macallan to shoot street photos highlighting the traditions and eccentricities of the Scottish people, as well as Scottish dogs.

The 2,030 bottles in this release features 35 pairings of single cask whiskies and a signed print from Erwitt’s Scottish adventure. The 5th release of the Masters series featured portrait and fashion photographer Mario Testino in 2014. Set at The China Club in Beijing, Testino shot a photo of a group of distinct characters to capture the spirit of the ultimate party.

Each of the 1,000 boxes featured a bottle of single malt whisky and six miniature bottles from six selected casks. On the photo side, each box contained Testino’s print and an exclusive photo-archival booklet containing 20 photos shot by Testino during the process. The Steven Klein release, announced just this week, features an exclusive signed print by Klein, a black leather case, a horse head bottle stopper, and a selection of custom barware tools. 1,000 boxes were released, with only 100 dedicated to the US market.

You can find out more about the Masters of Photography series and follow along with it through its website. Getting your hands on one of these limited edition boxes, however, probably won’t be very easy or cheap.