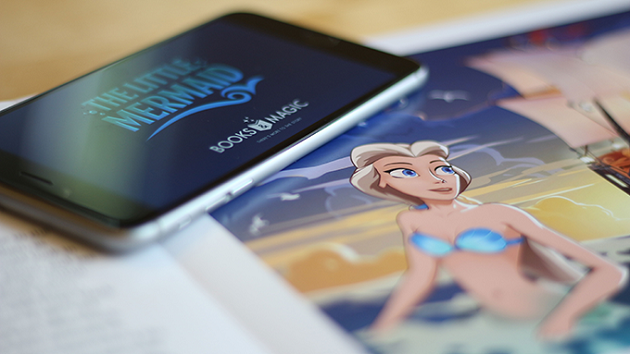 One of the best uses of augmented reality (AR) technology is the ability to bring still 2D imagery to life with a smartphone or tablet. Danish firm Books & Magic, has taken the original fairy tale The Little Mermaid by Hans Christian Andersen and created a book with which the images can be viewed through the company’s AR app.

The team at Books & Magic have honoured the original story, rather than the cartoon movie version for the project. The hand drawn artwork has been created to relate directly to the text and storyline, so when each scene comes to life with 3D atmospheric environments, animated characters, sound, interactive objects and gameplay it compliments the book. The ability for readers to use a mobile device as a window into the universe gives an extra sense freedom and interactivity, exploring the experience from any angle, from far away or close up.

With the 3D images being interactive the team has developed gameplay to suit the progression through the book. Gameplay starts easy on the first level and increases in difficulty, making it challenging for children of all ages, even the adults.

VRFocus will continue to follow the progress of The Little Mermaid funding campaign, reporting back any further updates.