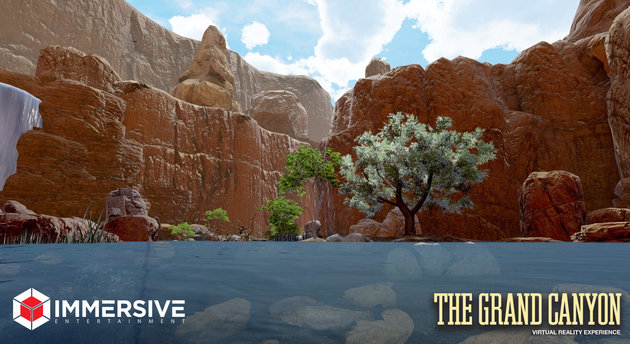 Halloween is nearing and, as usual, the videogame industry is getting in the spirit of things. Virtual reality (VR) developer Immersive Entertainment is no exception to this rule, despite only very recently releasing its new VR title, The Grand Canyon VR Experience onto Steam’s Early Access system. For this week only the studio is hosting a unique event to celebrate the holiday, allowing players to take a night time kayaking trip through the experience’s arresting scenery.

The event arrives as part of patch 1.03 for The Grand Canyon VR Experience and allows players to drift downstream using the Oculus Rift head-mounted display’s (HMD’s) second development kit (DK2). Players will be able to toggle between both daytime and night-time options. The latter also features new creatures, including fireflies and bats, with more to be added soon. A headlamp has also been added which can be turned on and off at the press of a button. Elsewhere, Immersive Entertainment notes that the experience has seen several small fixes.

The Grand Canyon VR Experience is a first-person exploration videogame featuring procedurally generated environments that ensure that no 2 trips are the same. The title is currently available for £6.99 GBP and is aiming for a full release in November 2015. While DK2 support is the only option right now, the developer also plans to add full support for the HTC Vive HMD, taking advantage of the Room Scale user-tracking and position-tracked controllers that are provided by Valve and its SteamVR system.

VRFocus will continue to follow The Grand Canyon VR Experience closely, reporting back with any further updates on its progress.