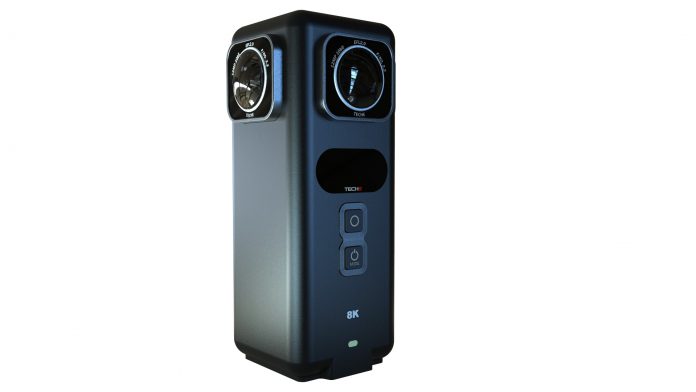 
360 Anywhere is a professional 8K 360 camera with 10-bit video, realtime stitching with stabilization, and 8K live streaming. Previously codenamed “Teche Revolution,” 360 Anywhere is the latest 360 camera from Teche, makers of other 360 cameras such as the Phiimax.

Teche 360 Anywhere is a four-lens professional 360 camera with 8K realtime stitching and stabilization. Here are its specifications:

The 360 Anywhere is completely sealed and fanless for silent operation. It has also IP65 splash resistance.

I saw the Teche 360 Anywhere at CES 2020, where they had a display that showed what they claimed to be an 8K live stream. They didn’t allow me test the camera because they said it was only a prototype. I’ve asked them to send me a sample video. I’ll update this post when I receive a sample.

Meanwhile, here is a video by McLarty Films from the Teche booth at CES 2020:

The post Teche 360 Anywhere is an 8K 360 camera with realtime stitching appeared first on 360 Rumors.