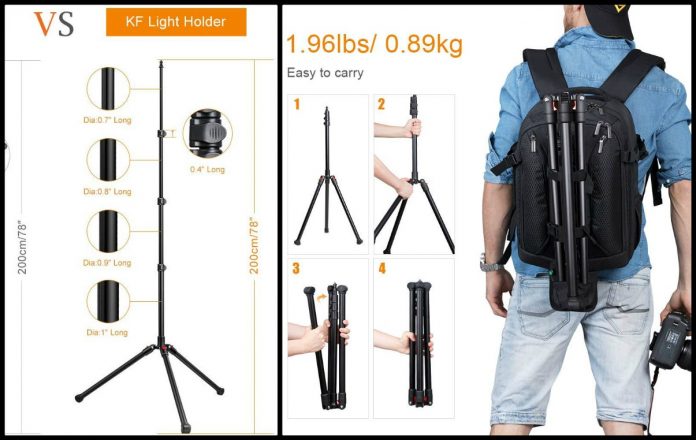 The main shaft has three flip locks and is made of aluminum.  The legs can be individually adjusted in 3 positions, and at its widest, the base is  41.7 inches in diameter.  K&F claims a load capacity of 8.8 lbs.  When the shaft is fully extended and the legs are at the highest position, the total height is up to 78.75 inches.

The stand has a 1/4-20 tripod connector, the same type used in almost all 360 cameras, and the tip is narrow enough for it to be invisible to all 360 cameras, such as GoPro MAX, and even slim ones such as the Ricoh Theta Z1, Insta360 One X.

Here is a product video:

In many ways, the K&F resembles one of my favorite stands, the Promaster LS-CT ($85 on Amazon; reviewed here) but is slightly less compact (16 inches vs. 19.7 inches), has one less segment to deal with, and is more affordable.  The K&F Concept stand is available on Amazon for $49 with free Prime shipping.