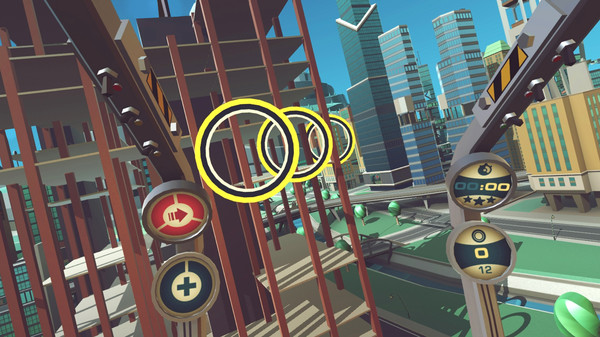 The HTC Vive head-mounted display (HMD) has a good selection of titles available on launch day, and since then developers have been releasing a steady stream of content for the device. The latest comes from The Room creator Fireproof Games with its aerial videogame Omega Agent, which launched today on Steam.

Omega Agent first arrived on Samsung mobile headset Gear VR back in May 2015, and became a launch title for Oculus Rift when it arrived on 28th March. Now it gets the Room Scale, HTC Vive treatment as you strap on a nuclear-powered jet pack to fly around the skies of Omega Island, a super-spy training facility.

Played from a first-person perspective, you are challenged with taking down UFOs in a stylised but dense cityscape. Your jet pack comes equipped with several weapons to shoot down enemies as well as boost and braking functionality, stopping you from slamming into buildings.

There’s timed goals to achieve as you aim to gain a full 3 stars, rising through the ranks of the spy elite to become the ultimate spy attain the top accolade of ‘Omega Agent’

The videogame costs £10.99 GBP, and VRFocus will continue to report on any further VR releases from Fireproof Games in the future.