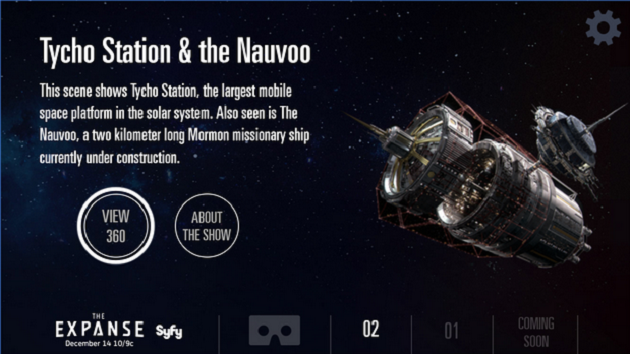 In the run-up to the Syfy channels launch of its new show The Expanse in December, previously announced the creation of a virtual reality (VR) app called Expanse VR. Now the channel has revealed new content for the app, giving viewers the chance to delve deeper into its world, immersing themselves in new locations and lore prior to the shows release.

The new content will allow viewers a fly-by of The Expanse’s Tycho Station, the largest mobile space platform in the solar system. Also seen in detail is The Nauvoo, a two kilometer long Mormon missionary ship currently under construction.

The Expanse VR app was developed by IM360 in collaboration with artists at Digital Domain, and is available for iOS and Android devices.

The app launched in July 2015 at San Diego Comic-Con, with its first experience taking users on a 360-degree tour of the spaceship Canterbury. The app can be used with any mobile head-mounted display (HMD), like the Google Cardboard or DODO Case.

The show will be premiering on Syfy Monday, December 14th 2015 at 10pm ET/PT, The Expanse is a 10-episode drama set 200 years in the future, after mankind has colonized the solar system. A hardened detective (Thomas Jane) and a rogue ship’s captain (Steven Strait) come together for what starts as the case of a missing young woman and evolves into a race across the solar system to expose the greatest conspiracy in human history.

VRFocus will continue to report on any further updates to the Expanse VR app as details are announced.