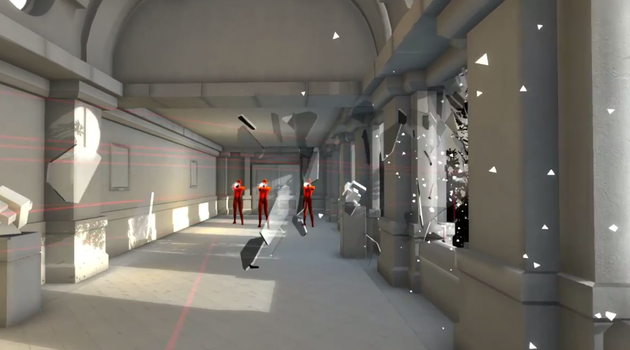 Perhaps one of the most anticipated virtual reality (VR) videogames on the way is SUPERHOT, the unique first-person shooter (FPS) that became a tremendous success on Kickstarter last year. The developer managed to raise some $250,798 USD towards the project which will be supporting the Oculus Rift head-mounted display (HMD) for its PC release. That was well over a year ago now, and the developer has recently confirmed that ‘Most of the game is finished’, meaning a launch hopefully isn’t too far off.

The team explained as much in a recent Kickstarter update. “We are getting closer to finishing SUPERHOT,” it wrote. “Currently, work is concentrated on polishing levels and testing some new game mechanics (that we can’t reveal until release ). Most of the game is finished so we are dividing our time between development [sic] and promotion.” Elsewhere the developer talked about its recent experiences showing the title at both Paris Games Week and Poznan Game Arena.

SUPERHOT is a unique FPS in which time moves only when the player does. With this in mind, players are tasked with eliminating all enemies within a level without getting hit by the oncoming barrage of bullets and attacks. Using the Oculus Rift and its positional tracking technology it’s even possible to lean out of the way of incoming fire.

VRFocus will continue to follow SUPERHOT closely, reporting back with any further updates on the title’s progress.

The post SUPERHOT Dev: ‘Most of the game is finished’ appeared first on VRFocus.