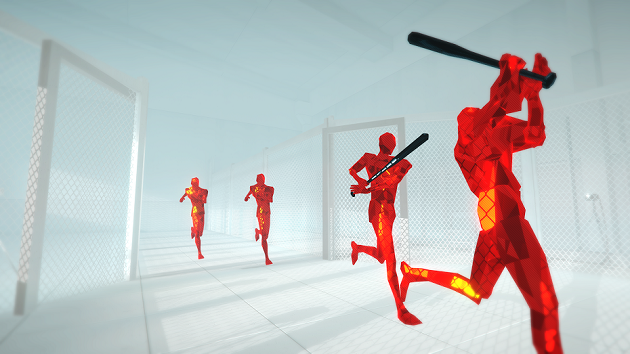 Today sees the release of the much anticipated first-person shooter (FPS) SUPERHOT by developer SUPERHOT Team on Steam. Starting out as a Kickstarter crowd-funded project in May 2014, hitting its $100,000 target within 24 hours and going on to raise $250,798 in total, the videogame will be launching on PC first with an Xbox One version to follow shortly after.

The highly stylised graphics in SUPERHOT, with pristine white backgrounds and subtle greys contrasting with vivid red enemies and red bullet tracers, help to focus the player on the videogames’ main mechanic, that being time moves only when the player moves.

If players stand still the world around them moves in super slow motion, allowing them to plan a route of attack through an onslaught of enemies, dodging bullets and other obstacles. SUPERHOT doesn’t feature regenerating health bars, ammo or weapon pickups like a standard FPS, meaning players must use their wits, fists and anything else they find to shoot, punch and out manoeuvre everything in the way.

As VRFocus has previously reported SUPERHOT had appeared at Oculus VR’s booth at a number of events throughout 2014, but during 2015 everything went quiet. Then earlier this month the developer posted a teasing quote on its Kickstarter page saying it had: “Big plans ahead for virtual reality.” These plans will be revealed after the videogame has released, so if the team mean the PC version hopefully that maybe fairly soon.

VRFocus will continue its coverage of SUPERHOT, reporting back on the latest VR announcements for the developer.