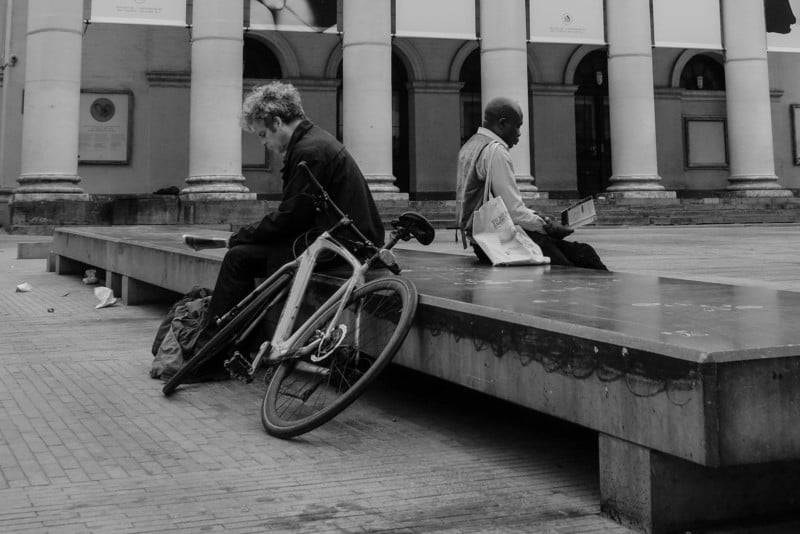 Many street photography tutorials discuss the same topics over and over—focussing techniques, composition, candid shooting, etc. However, I believe that one topic is underrepresented: storytelling.

Many composition principles in street photography are the same as in other kinds of photography. In addition, there needs to be some additional element of interest in the scene as well—an attention grabber. I mentioned in a previous post that, for example, Joel Meyerowitz’s key idea is relations.

In “Life of a Child“, I tried to express this element of relation. In belief, storytelling in street photography is another element of interest often overlooked. 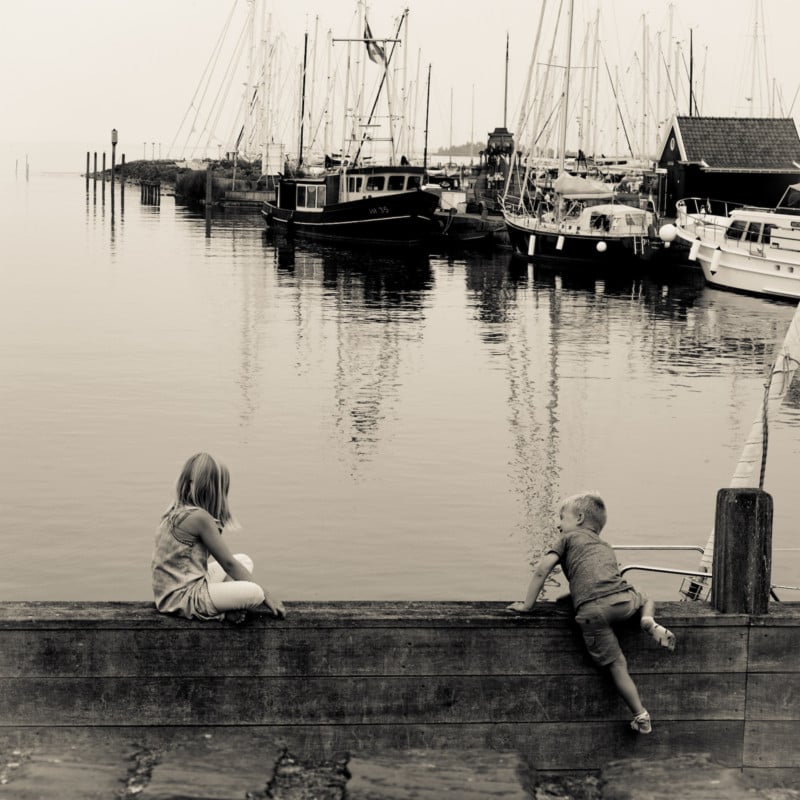 Stories are sometimes subtile and covered by more prominent features, such as light or composition. Sometimes, however, stories are told very strongly, as with the famous picture V-J Day in Times Square by Alfred Eisenstaedt.

This picture is an excellent example of storytelling in street photography, as it is not very emphasized in many composition principles; yet still it has become one of the most iconic street photographs of all times. This can mostly be attributed to the story behind and around the picture that unfolds in the mind of the viewer. I would argue that some of the most famous street photographs have become famous because they tell a strong story and not because of their composition.

Not all stories require much action. In fact, the lack of action in a shot can sometimes open up the storytelling space for the viewer. “Old Man and the Sea 2” tries to achieve exactly this. By omitting the action, the photograph provides more possibilities for interpretation—it is opening up for storylines to unfold. 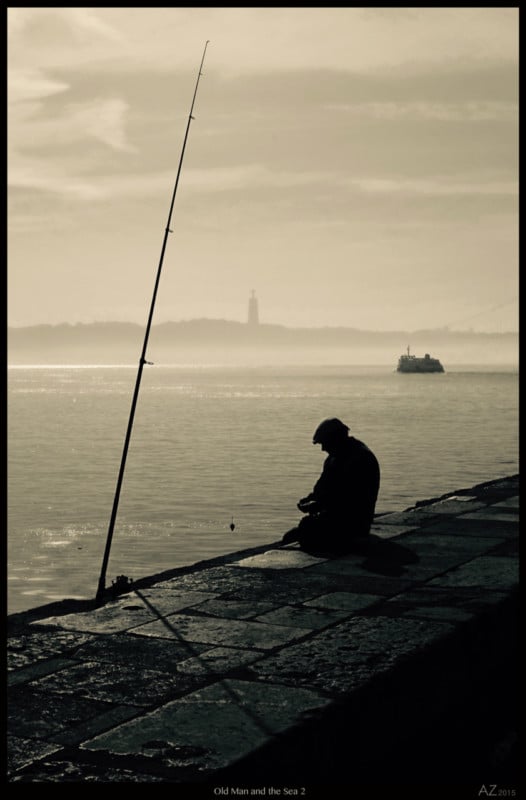 Is street photography a form of photojournalism of the everyday life? Can one compose an image by directing the subject? I think there are no right and wrong answers. They will strongly depend on whether one wants to represent undiluted and honest every day life. In fact, as we know from photojournalism, already the framing (what to include, what to leave out), the perspective (from below, from above) the film type etc. represent a selection of the truth—one that the photographer sees and/or want to convey.

The viewer will, in addition, make her own selection and add her own phantasies. The final story imagined is probably a different one than the one shot. I guess, one has to go with what feels right. Most of the time I shoot candidly. But when opportunity arises, and the idea for a story emerges, I might get in touch with the subject and direct her or him. I discuss this in more detail here. 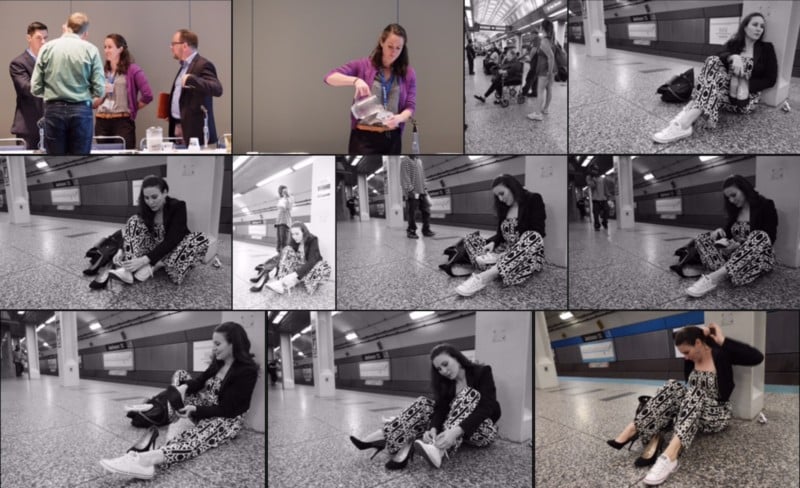 The final image then should on the one hand tell a story, while at the same time leave some space for imagination. 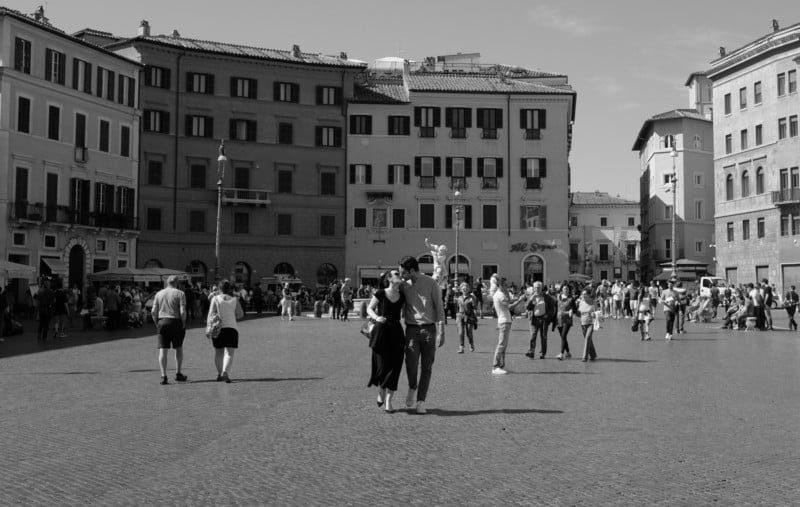 Key story line – All pictures that contain people contain also story lines. Some are quite clear, others are sidelines. The key story line is of course the prevalent one. The protagonist(s) in a photograph around which other storylines converge.

In the picture above, the two lovers are clearly the protagonists. The others play only a secondary role. 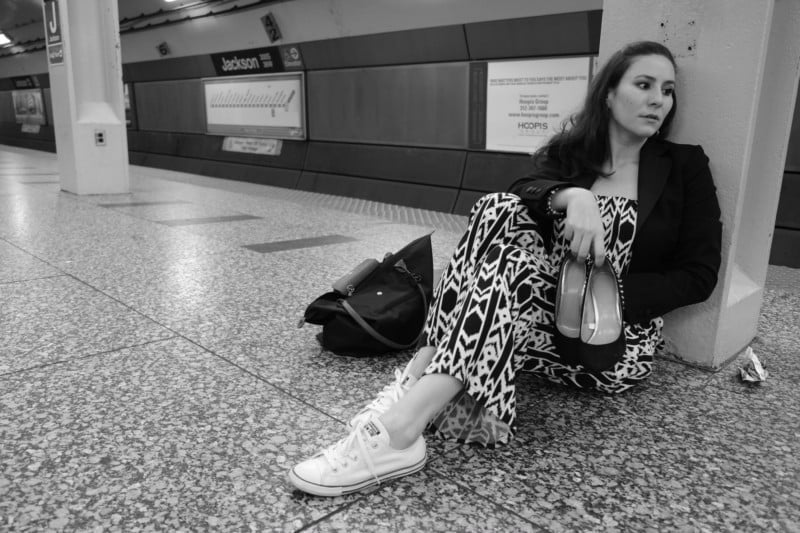 Process or Outcome – One can show a process or one can show the outcome. There are different reasons to pick either of them.

If the process in itself is very interesting (tying shoes isn’t), and one wants the audience not to miss the details in the production process, the former is a good choice. If one picks the outcome, then the process is subsumed. This one the one hand gives the viewer the opportunity to see the product, to tell him or herself the story of what the process might have been. It, however, also opens up the image for more story lines that one is distracted from when the process is in focus.

For example, would I have picked any of the photographs in which the woman in “the comfy shoes” is in the process of tying her shoes, the prominent story would be “ah, she is tying her comfy shoes, her feet must hurt from the high heels”. Picking the ended process, the present image allows other less prominent story lines to come forward: “ah, shoes (check); where is she looking, probably she is watching other people, or is she thinking, she does look very serious; why is she going home alone, oh, she is looking serious, might have to do with that, etc.”

The story that unfolds in the viewer’s head when action is not too dominant can sometimes make a picture with finished processes even more interesting.

Relationships require at least two subjects. But more than two subjects are also possible, of course. The facial expressions can also add to the storyline. For example, in “See Saw” below, the girl in the air is clearly excited and surprised. The lower girl’s expression shows determination. 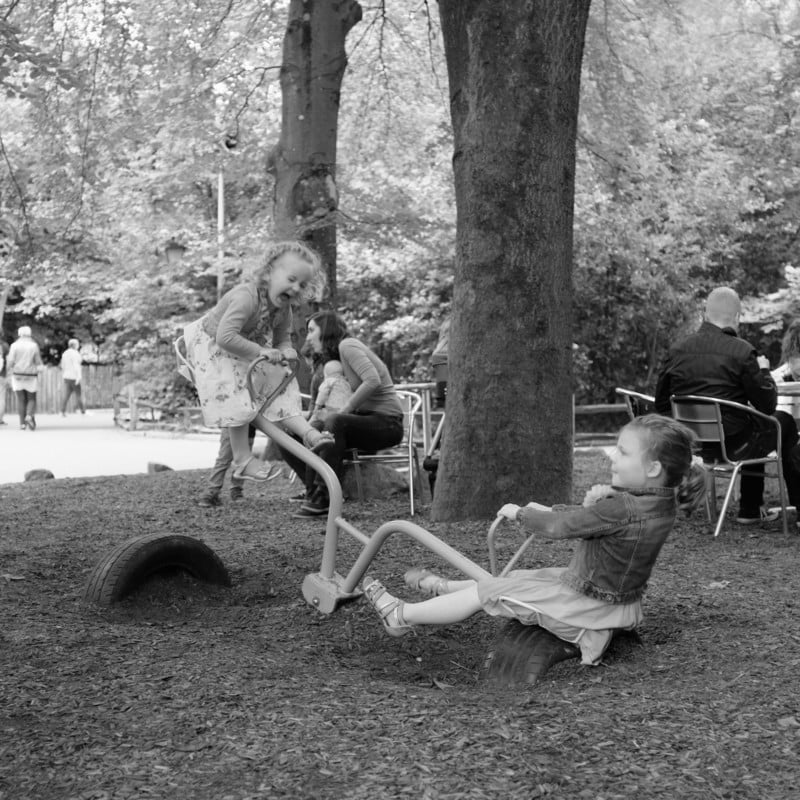 In order to enhance the tension between the depicted relation, one can look for contrasts and connects in the picture and also in the subjects that one pics.

The two subjects in “Absence” create a tension through many elements: their backs are facing; one is white, one black, and they are dressed in opposite colours. At the same time they are connected through sitting on the same bench and both being immersed in their literature.

Emotions – Happiness, sadness, boredom, anger, frustration, all these emotions make very interesting subjects of a street photograph and add to the storyline. They can be seen as shortcuts of storytelling as emotions immediately unfold in a story. Furthermore, emotions empathically engage the viewer (much more than nondescript expressions of random shots of pedestrians). 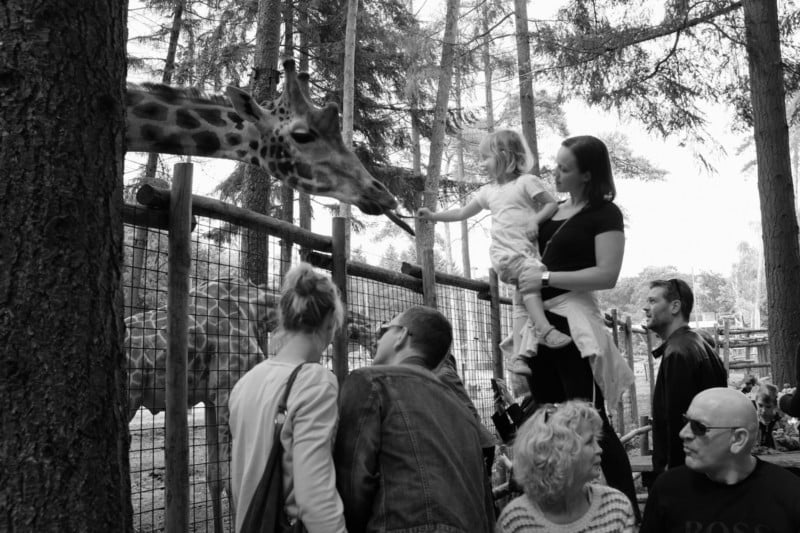 Archetypes, virtues and vices represent some of the most prominent storytelling elements. The last picture illustrates motherhood, for example. In addition, we have the girl’s courage and curiosity. Particularly journalism photography centres around archetypes, virtues, and vices, as they are universally recognisable and have a strong effect on the viewer.

For example, Joe Rosenthal’s 1945 “Raising the Flag on Iwo Jima” or “Tank Man” on Tiananmen Square in 1989 both portray heroism; however, in totally different ways.

About the author: Andrej Zwitter is an amateur photographer based in the Netherlands. He shoots a diverse range of styles, but believes that street photography in particular lays bare the soul of the photographer. To see more of his work on his blog. This article also appeared here.