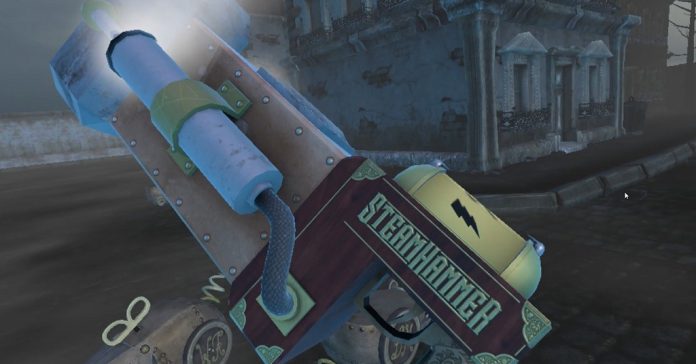 Set in a Steampunk style world of Victorian London, SteamHammerVR puts steam powered weaponry in the hands of players. From the titular Steam Hammer to the Steam Cannon, Magnet Beam, Rotor Hammer, Rotor Saw and Tesla Ray, players must utilise the armaments different features to destroy automated enemies based on animals. These are the creation of Professor Rattwurm who wishes to enslave England with his clockwork creations, ranging from rats, to lions and even a steam Kraken.

SteamHammerVR is already well into development with a demo scheduled to be released in July 2016. GamestormVR is seeking the funding to further expand and enhance the project whilst bring it to a wider audience by attending videogame shows prior to the planned release in December 2016.

The funding campaign is looking to raise £40,000 GBP by Tuesday, 12th July 2016, with a range of reward tiers from £5 to £5000. To get a copy of the videogame backers will need to go for £15 or above. Higher tiers add additional items such as t-shirts or a 3D printed model of the SteamHammer, while at the top tier backers will be able to meet the team.

Developed just for the HTC Vive head-mounted display (HMD) to make use of its positional-tracked controllers and Room Scale system, the studio has also just released new alpha gameplay footage. The video (which can be seen below) showcases some of the weapon types in action against the basic mechanical rats and ravens.

VRFocus will continue to follow the progress of SteamHammerVR, reporting back with any further updates from either Steam Greenlight or Kickstarter campaigns.