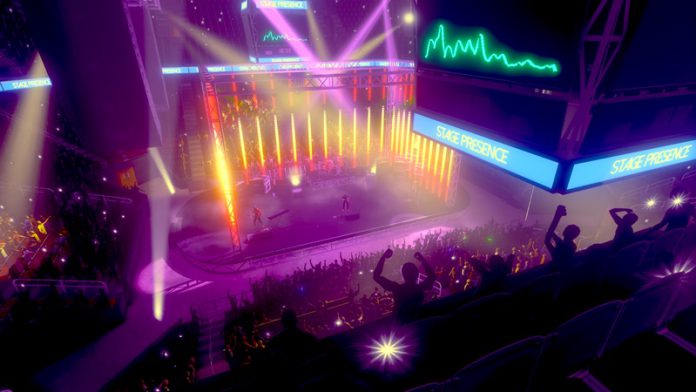 If you’re one of the many people who suffer from crippling stage fright then newly announced virtual reality (VR) title Stage Presence will present a challenge. Developed by Sea Green Games it will be the first VR videogame published by tinyBuilds.

In Stage Presence players will take to the mic as all the electronics suddenly fail apart from one microphone. It’s up to you to keep the crowd entertained with just your voice.

Do well and the crowd will applaud you, do badly and you’ll get booed off stage. Adding to the mix is an online feature where you can invite friends into the crowd to spur you on or throw bottles is piss at you. The title can also be streamed through Twitch allowing the chat function to take control of the crowd so your performance can be seen by lots of people online. There will be a full story mode with multiple venues to unlock as you progress through.

No release date has yet been set for this latest version of Stage Presence but it will be launching on both Steam and Oculus Home in the next few months tinyBuild has stated. Regular readers of VRFocus may remember that Sea Green Games launched a successful Steam Greenlight campaign last year for the title, and prior to that released an early version to coincide with the 2014 Glastonbury Music Festival via Oculus Share.

VRFocus will continue to bring you further details on Stage Presence as updates are made available.