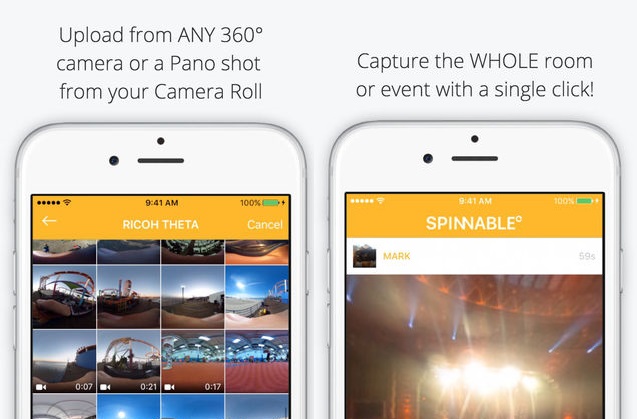 Intermersive, Inc., has today announced the launch of its cross-platform 360 photo social sharing app, Spinnable, allowing users to create, consume, and share their own photo content in full 360 degrees. The free app is hardware agnostic and compatible with all 360 capture and playback devices.

Spinnable allows users to take a panorama picture with the phone’s native camera with no additional hardware required, and with its proprietary technology stitches it into a spherical image automatically upon upload. Once in the app, media on the device can be moved by swiping with your finger or panning using the gyroscope in the phone. In addition, Spinnable offers cardboard mode so you can put your phone in a Google Cardboard or similar device for a virtual reality (VR) experience.

In addition to user created content, Spinnable is creating content in-house that will be accessed exclusively through the app. The company is also launching live-streaming events in 360 degrees directly through the app.

“What makes Spinnable so compelling is that the content moves on your device,” says Mark Demarest, Co-founder and CEO of Spinnable. “In addition, you can view it in a way that makes you feel like you’re really there, and lastly, Spinnable allows anyone to create this content themselves which is a fundamental shift in how we experience and engage with content,”

Spinnable is now available on iOS, and will soon launch on Android, AppleTV and Samsung Gear VR. The company is also in development with other third-party head-mounted device (HMD) manufacturers and VRFocus will keep you updated with future editions of the app made available for those devices.