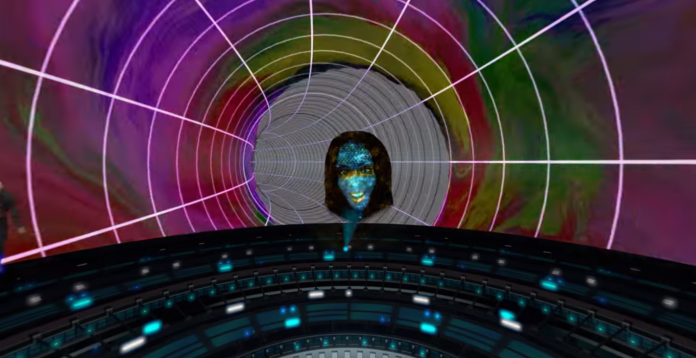 A very popular way in which music videos are being designed in virtual reality (VR) is with the use of incredibly coloured trippy visuals that move towards the viewer, taking them on a journey of sorts, and this is exactly what VR Playhouse has created for Dawn Richard’s new single, Not Above That.

Music videos have progressed in a big way in VR, and in Not Above That viewers are transported through a universe of rainbow vortexes, trippy wormholes, exploding planets, and asteroid fields. These visuals all match up with that of the alternative electronic singer-songwriter’s piece, which can be enjoyed in 360-degree video on YouTube. The effects were created by VR Playhouse with most assets created in Houdini and modelling in Maya. To this, the team then cleaned up the visuals, created light effects, and added hologram layers to then create this final piece.

The music video didn’t come from thin air, as it was inspired by the 2D music video for the single, which features space-age imagery and futuristic costumes and makeup. DJ Turner and Monty Marsh both directed the 3D version, and Dawn Richards has been described as “an artist who has always sought to be on the cutting-edge of technology and pop culture”.

Director Turner agrees that VR was the perfect medium for this particular project. “Every art form that has been created over the years – music, art, computer graphics, filmmaking – they all play a role in this world of virtual reality,” says Turner. “CG artists have always created these amazing little worlds, but you only get to view them through a tiny window. Now with VR, you actually get to be immersed in them. It’s exciting to see what the future holds.”

The music video can be viewed below on Cardboard head-mounted displays (HMD).

For more on the latest music videos in the world of VR, as well as all news and updates, make sure to check back with VFocus.