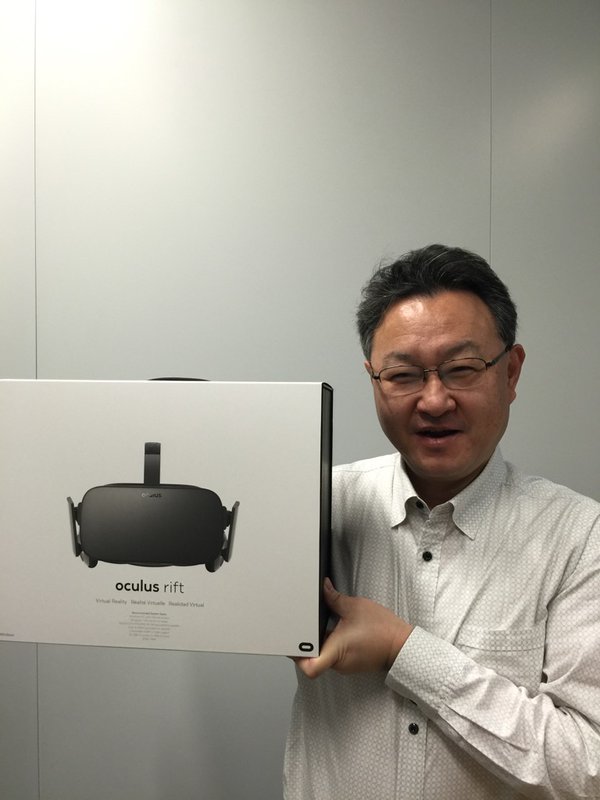 Shuhei Yoshida, Sony Interactive Entertainment (SIE) Head of Worldwide Studios, has long been an evangelist for the PlayStation VR virtual reality (VR) head-mounted display (HMD) for PlayStation 4. The exec helped introduce the device as Project Morpheus all the way back in 2014 and has since regularly been seen promoting it in interviews and press conferences. But Yoshida isn’t just a fan of his own device; he’s also in love with VR in general. As such, this week saw him get his very own Oculus Rift.

Yoshida recently tweeted the below image of himself holding the box for his own unit of the long awaited PC-based HMD, which launched last week albeit with some shipping issues. In the accompanying message, he noted that he was yet to receive a VR ready PC. It’s not clear if this means he purchased one of the Oculus Ready PC bundles and hasn’t got his hands on the rig yet, or if he simply hasn’t picked up a separate device. Yoshida also hasn’t revealed if he’ll be getting an HTC Vive, which launched yesterday.

PlayStation VR itself is due to launch in October 2016 for $399 USD for a core unit and $499 for a bundle with a PlayStation Camera, two PlayStation Move motion controllers and a copy of SCE London Studio’s VR compilation title, PlayStation VR Worlds.

Check back with VRFocus for the latest on PlayStation VR.