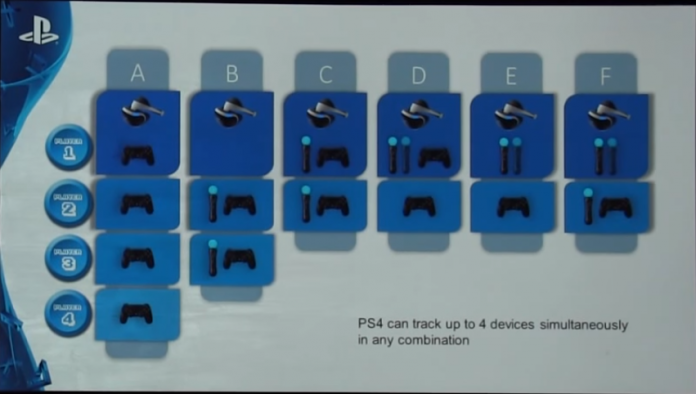 User tracking is an essential part of any high end virtual reality (VR) head-mounted display (HMD), and PlayStation VR is no different. Sony Computer Entertainment’s (SCE’s) upcoming device users the PlayStation Camera to track lights that emit from the HMD, much like it does with the DualShock 4 controller and its light bar. The PlayStation 4 can track up to four devices in any combination with this system. Recently, SCE itself has showcased just how varied those combinations can become.

The image above is taken from a slide showing during SCE Technical Account Manager Vernon Harmon’s recent ‘Embrace Virtual Reality with PlayStation VR‘ talk at the 2015 Montreal International Game Summit. It showcases six different combinations of tracked devices. Note that each seems to contain five devices in total, suggesting PlayStation VR itself doesn’t count as one four. One setup includes the HMD and four DualShock 4s, while the rest show various combinations of the HMD, the controller and the PlayStation Move motion controller.

But this isn’t a strict limit, as Harmoned explained: “As you can see from this sampling there are a lot of different combinations of tracked controllers that can give you a number of different multiplayer configurations. And this isn’t even taking to account that you can have a second screen controlled experience on a mobile device that’s used as additional control inputs. And also this is only local control configurations; you could have networked situations that introduce more combinations with other VR headsets and controllers.”

PlayStation VR is set to ship in H1 2016. VRFocus will continue to follow the device closely, reporting back with the latest updates on its progress.