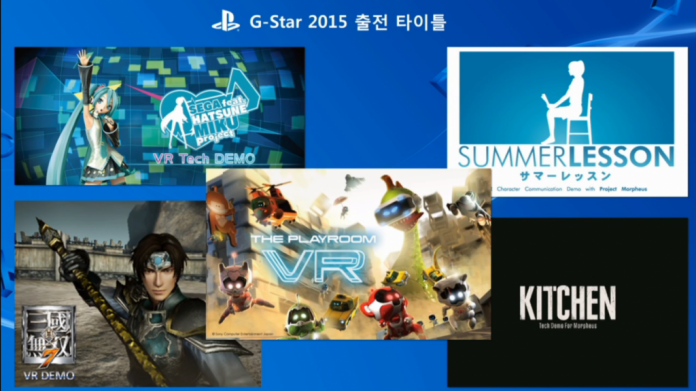 When it comes to virtual reality (VR) news, apart from the much requested information on date and price of course, it would be rather difficult to claim Sony are holding back on talking about their PlayStation VR head-mounted display (HMD).  Following a busy Paris Games Week that saw quite a few announcements and  a lot of new media dropped and with Sony’s PlayStation Experience event coming later this month, Sony have still made some announcements at today’s Sony Computer Entertainment Korea (SCEK) press conference.

In a PlayStation VR segment presented by the President of Sony’s Worldwide Studios Shuhei Yoshida, Sony confirmed the line-up for this year’s G-Star event. G-Star is Korea’s annual videogame show and trade event that this year is being held at BEXCO, Busan from November 12th to 15th.

It was also later revealed by Yoshida whilst discussing footage of The Playroom VR that the ‘Ghost House‘ play mode will be shown next week. Ghost House was previously shown at Paris Games Week, whilst earlier PSVR showcases featured ‘Monster Escape’.

VRFocus will continue to bring you news and features relating to the PlayStation VR throughout the week as well as other stories from around the VR industry.