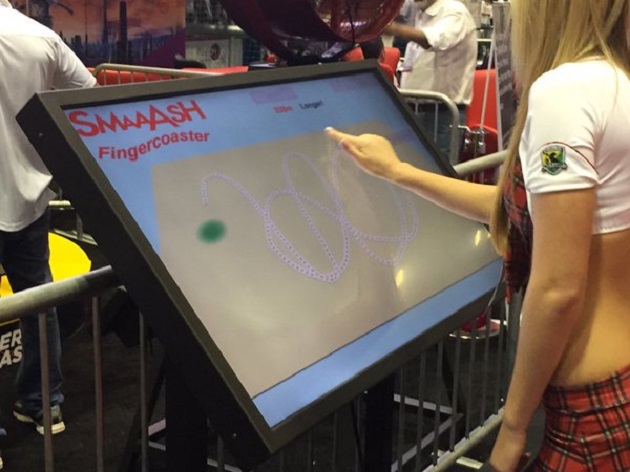 At the recent International Association of Amusement Parks and Attractions (IAAPA) Expo 2015 held earlier this month in Orlando, Florida, Smaaash a Mumbai-based developer showcased its virtual reality (VR) experience Finger Coaster. The Finger Coaster experience allows users to draw their own rollercoaster before hopping on to enjoy the ride.

After visitors have created their coaster, up to four people can ride the newly-created rollercoaster sitting in a four-seater car which is on an electronic motion platform. The users wear an Oculus Rift VR head-mounted display (HMD) to complete the attraction. To aid with the immersion, simulated rollercoaster sound effects are added, and a fan creates downhill wind effects on the appropriate sections of the VR experience.

“The Finger Coaster is a ‘make-your-own-ride experience’,” said Smaaash’s chief technology officer, Kaizad Bajina, reports AM2. “You can actually draw it out with your finger, hence the name. You can make it as long as you want with however many loops you want and then you can choose the setting whether that be a lake, a theme park, a frozen area or a beach.”

“It’s mainly designed for a mall or an Family Entertainment Centre, but it can be made completely portable and go virtually anywhere. It can actually be installed and deployed very easily, with the ride ready to go in around two hours,” adds Bajina.

Before its debut at the IAAPA , Smaaash had set up Finger Coaster several Family Entertainment Centres (FECs) in India. With orders taken at the show, the VR attraction will get to see a worldwide audience. The experience should be making its way to Europe, the US and Asia in the near future.

VRFocus will continue to follow the latest VR industry news, reporting back with any new announcements.