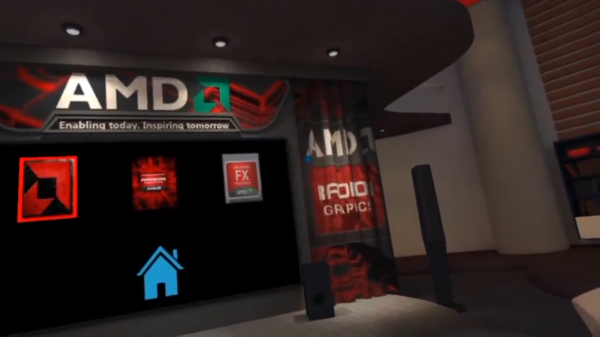 Earlier in the week we brought you an update relating to AMD. The company released a video showcasing the use of virtual reality (VR) in applications other than gaming. Specifically exploring how VR can be used as an educational aid for children in a classroom environment from a virtual school trip to seeing recreations of historical moments. It also included other fields already using VR to benefit their work such as those of scientific research and medicine. Whilst you may have seen that video at the time it is sometimes difficult to show how such videos can be displayed in VR, especially when they are shown as a part of separate virtual spaces.

One such studio creating these types of virtual spaces is Selvz, who have released a video of the VR media platform in action. The demonstration features a single-eye view of the recent AMD video hosted within a branded virtual AMD media lounge. It is certainly worth watching when you consider that as VR develops, the use of VR meeting rooms and virtual gatherings will become more prevalent.  In short, this type of branded virtual spaces will be something you’ll see more of in the future.

VRFocus will of course be bringing you more information about the development of VR’s uses as a social and business tool, as well as its use for commercial and non-commercial endeavours. What businesses can you see using this virtual lounge in the future.