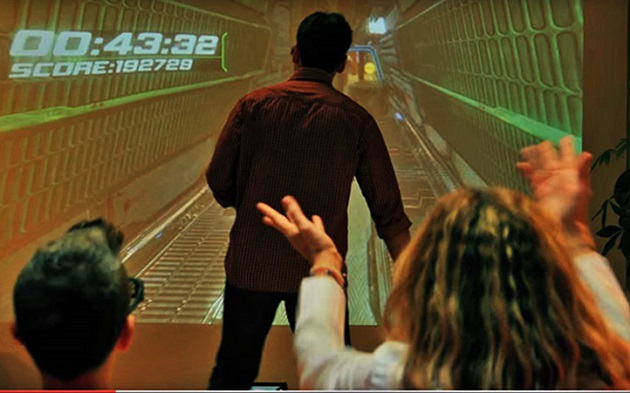 With the Consumer Electronics Show (CES) 2016 in Las Vegas, Nevada, only a week away more companies are announcing virtual reality (VR) products showcasing at the event. French company Scale-1 Portal, which specialises projection-based virtual reality (VR) solutions has announced the launch of SCALee, a portable VR media centre for the consumer market. SCALee will be showcased for the first time at the CES event.

SCALee projects an image onto a wall just like a standard projector, but where it significantly differs is that the imagery is immersive and interactive. Players will be able to interact naturally in 1:1 scale games and applications.

“This is a new form of virtual reality technology, which allows several people to comfortably enjoy the immersive experience in their living room, with no need for any headset,” explains Julien Baessens, CTO of Scale-1 Portal in a statement. The unit includes a Windows 10 based computer, so that the 3 meter wide projected screen can be used as a media center, browse the internet or play standard games.

Scale-1 Portal will bundle SCALee with Future Runner, an in-house designed obstacle and battle race game set in a futuristic atmosphere. The company plan to develop more games and experiences, and a software development kit (SDK) is available to third-party developers who wish to create their projects for the platform.

The SCALee projector is scheduled for release in Q4 of 2016, while the company will be launching a dedicated crowd-funding campaign, with pre-orders taken in January and shipped starting February.

VRFocus will continue to follow any new updates from Scale-1 Portal, reporting back any further announcements.