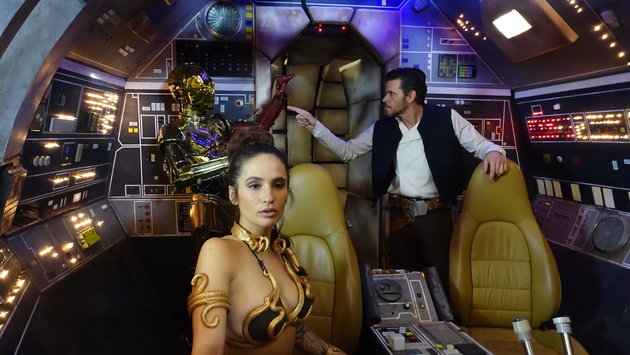 Last week VRFocus reported on the launch of a new 360 degree Star Wars parody video in Wookie on Vacation, a Star Wars parody from YouTube content creator, Sam Macaroni on the Jaunt platform. The video can be viewed via Jaunt’s mobile app either on the Google Cardboard and Gear VR mobile-based head-mounted displays (HMDs). Recently, VRFocus spoke to Macaroni himself about the project.

In the interview below, Macaroni talks about the thinking behind this new series, and the processes used to create it. He also teases future projects and more.

VRFocus: Can you provide a brief overview of ‘Wookie on Vacation’ and your aims with the project?

Sam Macaroni (SM): It’s a parody of Star Wars that finds Han Solo without his wookie co-pilot. Han is having a tough time because no one can fill Chewie’s shoes. My goal was to make something that mixed live action with computer generated visuals so that I could teach myself the process. Everything in VR is so new that I’m trying to figure out how to do all of the tricks I spent my whole life learning how to do. Things like moving the camera, adding special effects and removing unwanted objects from the footage are all really tough in VR.

VRFocus: Why did you choose parody for this experience? Does VR add anything to this genre?

SM: I’ve made a lot of parody films on youtube. Original content doesn’t get shared as much. I haven’t seen any VR parodies so I wanted to see if one would work.

VRFocus: How was the video shot? Did you use any specific camera or rig setup?

SM: I shot it on Jaunt’s ONE camera. The live action element was filmed in my living room where I have a full sized Millennium Falcon cockpit replica set.

VRFocus: The video uses a mixture of live action and computer generated visuals which is something we’ve not seen much of in VR. Was this a complicated aspect to pull off?

SM: It was tough. With each new VR video I make, I try to teach myself a new trick. The object of this one was to mix CG with live action. My partner Tim Montijo and I used several programs to make this video. In addition to 3ds Max, we also used a new version of SkyBox that the guys from Mettle were nice enough to let us beta test. 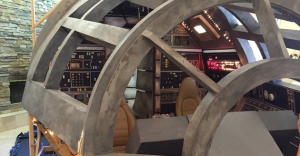 VRFocus: Is this intended to be a VR series? If so how many episodes are you planning and when are they planned for release?

SM: Yes, it’s a series. In the next episode Han tries to work with Spock as his co-pilot. As you can imagine, the two don’t get along.

VRFocus: How did your collaboration with Jaunt to have the video featured on their app come about?

SM: I work at Maker Studios and we have a partnership with Jaunt to produce VR content.

VRFocus: Can you tell us anything about any other VR projects you have in the works?

SM: Tim and I have finished five VR films. Four of them are with Jaunt and one is with Epic Games. In addition to those, we are working with The Secret Location on a music video.

VRFocus: Would you be interested in working on any other types of VR experiences outside of video?

VRFocus: You recently featured in a documentary series on VR from Epic Games. How did you come to be involved with that project?

SM: I got a call from the people at Epic Games. I didn’t realize that I would appear in a doc with all of those legends.