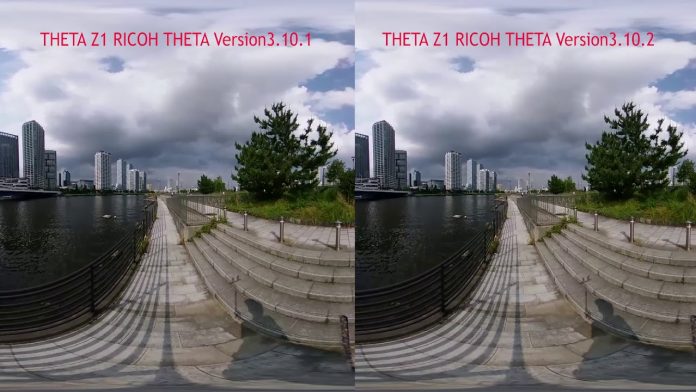 
Ricoh Theta Z1 (reviewed here) and Theta V (reviewed here) now have much better video stabilization thanks to a software and firmware update.   Ricoh posted a firmware update last month but the improvement wasn’t as significant until Ricoh posted a software update that took advantage of the new firmware.  The difference is dramatic.  In this post, we’ll look at a comparison between the old and new stabilization performance.

Here’s a video that demonstrates the new stabilization performance:

Here is a comparison video by Naoto Somese:

To use the new stabilization, simply update your Ricoh Theta desktop app to version 3.10.2 or later.  You should also ensure that the firmware has been updated to the May 22, 2019 version or later.

Another improvement is that Theta Z1 now has two options for stitching.  The options change the way the nadir is stitched.  In the current stitching method, gaps are minimized.  However, this results in greater distortion.  With the new stitching option, gaps is the nadir are allowed, which results in reduced distortion.

The new stitching option for the Z1 appears in the settings of the smartphone app.