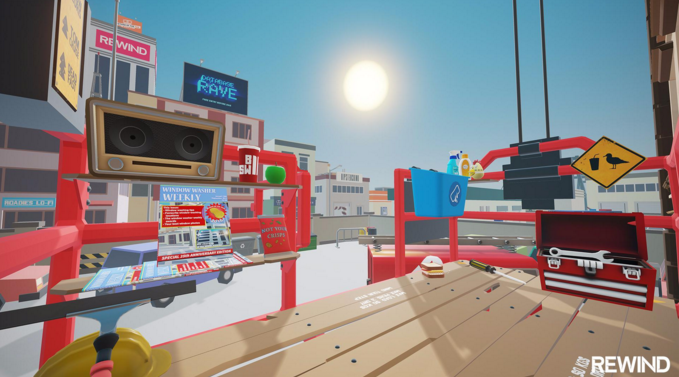 Virtual reality (VR) fans may well have heard of Rewind, a UK-based VR, digital and physical production agency. Earlier in the year it was revealed that the team had partnered with the BBC to produce a 360 degree recording of a sequence from popular Saturday night TV show, Strictly Come Dancing, and it’s also worked with car maker Lexus to produce a 360 degree experience based around the Lexus RX. But Rewind isn’t limiting its VR work to VR video; it’s also working on its first full videogame in Pane In The Glass.

Pane In The Glass is planned as a small experience for HTC and Valve’s HTC Vive head-mounted display (HMD). The title will be making full use of Valve’s SteamVR system, using position tracked controllers to get players to clean as many windows as they can within a given time limit. As you scrub the dirt off of surfaces you must also make sure not to knock off flower pots as well as avoid seagulls that dive-bomb at you. Players stand on a gondola lift that gives them a 4 x 5 metre space to walk around in with SteamVR’s Room Scale tracking. A scoring system also features.

The title started life as a project in an internal game jam at Rewind, with the full version now being developed using Epic Games’ Unreal Engine 4. A release date is yet to be set, though the HTC Vive itself is yet to release. A limited launch for the device is expected to take place before the end of 2015 will a much bigger rollout then following on in the first three months of next year. As with a release date, a final price for the device is yet to be announced. A possible port to the Oculus Rift HMD with support for the Oculus Touch position-tracked controllers is also yet to be mentioned.

Rewind will be attending next week’s VRLO event in London on 7th December, so expect to hear more on Pane In The Glass soon. VRFocus itself will be at the event for hands-on, interviews and more with its line-up.

The post Rewind Bringing Pane In The Glass to HTC Vive appeared first on VRFocus.