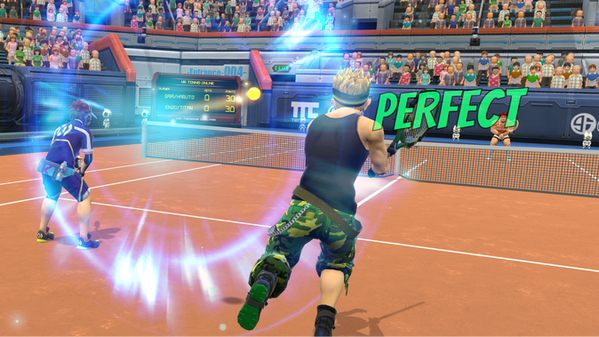 The Oculus Rift launch line-up is a plentiful selection, including a number of genres that you wouldn’t necessarily expect to be first off the line making the jump into the new medium. VR Tennis Online is very much one of these titles, with the decision to opt for virtual reality (VR) over traditional 2D monitors remaining a mystery until some hours have been invested.

Playing very similar to SEGA’s once cherished Virtua Tennis series, VR Tennis Online delivers the basics on good form. A light tutorial introduces aiming and the different types of shots available before offering the player the chance to prove they’ve made the grade with a series of challenges. It’s simple and effective, and most definitely following the established rules of videogame orientation.

When receiving the ball a circle surrounding it indicates the perfect time to strike as it changes colour; early shots will return with less force, late shots will more often than not result in a lost point. A white indicator appears on the ground shortly before the ball makes impact as a warning for the player, though after some time is spent with the videogame positioning will become instinctive. Sadly, the serving isn’t quite as well developed as the rallies, with the precision required to land your shot where desired demanding razor’s edge movement of the Xbox One controller’s left analog stick.

Where VR Tennis Online differs from it’s most obvious inspiration is in that of the selectable ‘Killer Techniques’ on offer. A player may take two into each match, equipping to the left or right shoulder buttons, and once a charge has been achieved can execute these on the court. From sending the ball hurtling into a tornado to making it move erratically in sharp angles, these Killer Techniques are clearly inspired by Mario Tennis, and are incredibly difficult to return without much practice.

However, it’s also these Killer Techniques that showcase the value of VR in VR Tennis Online. The videogame features two camera options, labelled ‘third person’ and ‘fixed’, with the former following the player around the court in an almost over-the-should viewpoint. While this may sound like an awful idea it’s actually much more preferable than the fixed option, and makes the Killer Techniques far more exciting as the players rapidly change their viewpoints in an attempt to guess where the ball may land.

The single-player component of VR Tennis Online offers both exhibition matches and tournaments to play through, the latter of which will unlock new Killer Techniques. Online gameplay offers ranked matches for both singles and doubles, and is undoubtedly a highlight of the videogame. The AI available in single-player can provide a good match (various difficulty settings are on offer) but there’s nothing like taking a rival onto the court and teaching them a thing-or-two. Sadly, at present, VR Tennis Online doesn’t feature VOIP, so no voice chat option is available. This is a sorely missed opportunity.

Visually VR Tennis Online is comfortable, though hardly stunning. Bright colours and pleasant enough character design accompany the slightly off-beat gameplay well, though it must be said that the non-animated, sprite-based crowd is somewhat of a culture shock when you first notice it: after all these years of VR promising greater immersion, that sound effect of a crowd applauding suddenly feels very stale when you notice the lifeless caricatures surrounding you.

A fun yet flawed launch title, VR Tennis Online has a decent amount of content available but is hardly likely to maintain interest as long as some of the bigger names such as Chronos or Lucky’s Tale. However, it’s arguably not intended to. It’s a snack to nibble on in between the mouthfuls of AAA, and a perfectly enjoyable one at that.