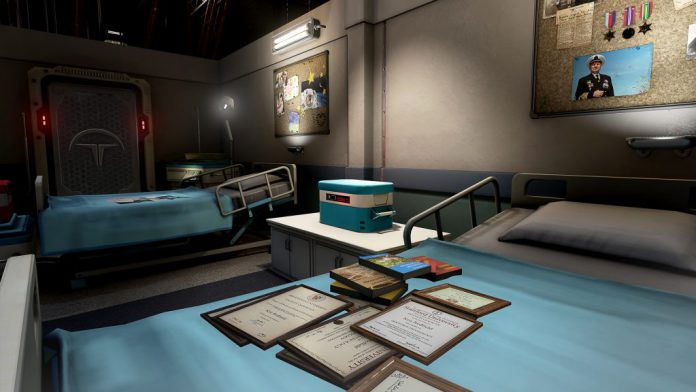 ‘Immersion’ is a strong, often misunderstood word. Within virtual reality (VR) it differs greatly from ‘presence’ – the state in which you feel as though you are in a space – and aligns with traditional videogame experiences in that you forget about the world outside. It’s escapism in a simple and direct form, and this is exactly what nDreams has been hoping to achieve with their first big budget VR release: The Assembly.

Years in the making, The Assembly is nDreams’ big bet on VR despite actually being the UK studio’s third official release for the new medium. It’s a videogame born of experimentation and passion for VR, both of which are clearly visible throughout its lengthy campaign. It achieves immersion in its world with ease – the player can quickly become involved with the two playable characters’ stories and the morally dubious nature of the environment they find themselves in – though it’s arguably the techniques used to deliver this that shout louder than the experience achieved in doing so.

Though nDreams have been cautious to use the word ‘adventure’, The Assembly is in fact more closely related to the adventure videogame genre than any other. It’s far from the point-n’-click arrangement of classic PC videogames or even Telltale Games’ interactive storytelling, but within VR it’s laying the groundwork for what will inevitably become an explosion of similar titles in due course. Being a seated VR experience the closest comparable at present is arguably TECHNOLUST, but in that of the goals set out for the player there’s generally very little that aligns with The Assembly’s puzzle-orientated gameplay loop.

Throughout the adventure the player will find themselves faced with moral dilemmas, though there’s only a small amount of these (quite obviously signposted) that will have an effect on the outcome of the videogame. There are a number of different endings available though each can be achieved simply by replaying the final chapter. The Assembly finds itself trying to offer depth through storytelling but does so instead through the environment and the keen use of VR to deliver an experience removed from a traditional 2D box. 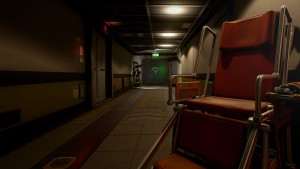 To traverse the wide variety of environments hosted in The Assembly’s underground bunker the player has several movement control schemes available. Snap movement is set by default with a ‘classic’ movement scheme also available. More interestingly however, The Assembly features one of the best teleportation systems yet seen in a seated VR videogame. Holding the teleportation button will bring into play a silhouette of your character and moving your head will align to a new position for eventual release and automated movement. However, this silhouette will vary in stance as a visual indicator of whether or not you will be aligned with an interactive object. It’s far simpler than the turning arc featured in earlier preview builds and perfectly signposted for the player to realise the objective desired upon movement.

There are flaws within The Assembly’s core design, however. While it could be argued that having an on-screen avatar in some VR experiences can be jarring, the exact opposite would be true of The Assembly. Given that the player is presented with a silhouette of their current character upon teleportation there would be no divide in the regular changing of sexes – the player is already aware of the physicality of their present character – and given that the opening sequences feature much sitting, it’s somewhat disconcerting that you cannot see your legs and instead appear as an ethereal being.

The visual and aural design of The Assembly is very high quality – absent avatar aside – with large environments and lighting blending to create a strong argument for suspension-of-disbelief: you can immerse yourself in the world to the point where you can believe such an organisation could exist. The voice acting is also well delivered, with even the most basic characters presenting a believable in their aggression or relationship with the player’s character. 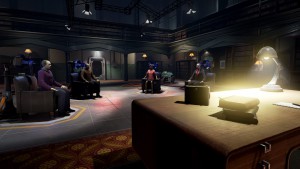 The Assembly is a very enjoyable experience within its genre, but is greater perceived as a learning tool for future developments. There are a lot of design decisions that have been made purely to cultivate the immersive nature of VR and are hugely successful in that regard, while significantly less successful when played on a traditional monitor; a trait that will offer other developers lessons on how to capitalise on the strengths of VR. However, the pacing of the videogame is often mismatched with the objective and the puzzle variety is not as deep as competing titles such as The Gallery: Call of the Starseed. The Assembly is a worthy investment for VR aficionados, though it’s likely to be superseded by a rival learning from the lessons taught here – or potentially nDreams themselves – very soon.