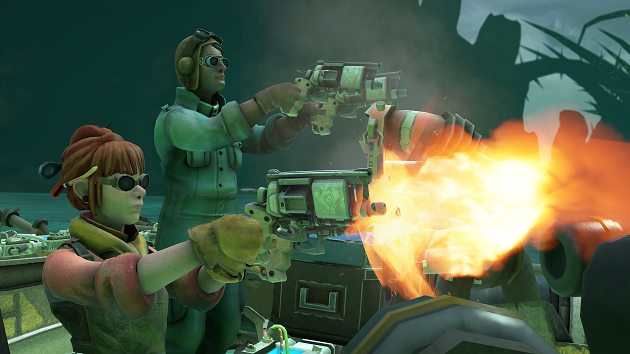 Stress Level Zero’s Hover Junkers is a virtual reality (VR) exclusive experience built from the ground-up to take full advantage of the HTC Vive’s roomscale capabilities. Featuring hovering ships as your base of operations, players float around large maps until they encounter one another an engage in first-person shooter (FPS) combat. It’s a unique take on bringing FPS to VR, and for the most part delivers on its promises.

The fact that your arsenal is decidedly limited is a disappointment, but keeping things balanced is far more important. This, Hover Junkers does very well. A variety of ship types is available with your options being limited only by the size of your play area, and a co-operative gameplay is also available. This option is by far the most enjoyable way to play Hover Junkers, especially when beginning.

The player begins by placing a small selection of pieces of junk around their vessel to act as cover. These items can be shot off in battle and also have different advantages: some may take more damage whereas other can provide a hole to fire through for as long as they last. Control of your ship takes just a few moments to get to grips with. Using the default armament the player can flick a switch to establish a connection to the ship’s steering and throttle, at which point hand rotation dictates direction and holding the trigger will accelerate. At first it seems unwieldy, but any experienced gamer will pick up the nuances of ship control swiftly.

The free hand you have can be used to wield one of the two weapons: pistol or shotgun. The pistol holds more rounds and is more accurate, whereas the shotgun packs a huge punch up-close. The reload mechanics are interesting but occasionally unreliable: touch the HTC Vive motion-controller touchpad to open the weapon, circle with your thumb to reload shells one-by-one, then flick your wrist to close ready to fire. The player can of course put away their driving device and engage in combat with two weapons, but this would leave them incredibly vulnerable when playing alone given the unnecessary complexity of changing equipped item. In a fast-paced videogame like Hover Junkers, a simple button-to-scroll system would work better than selecting from a virtual grid. 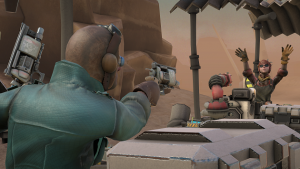 Unlike the modern online multiplayer affairs which gamers are used to, Hover Junkers does not feature any progression system of which to speak. A seasonal ranking system is included, which maintains a detail statistics breakdown of your performance, but there are no unlocks or attainable upgrades; cosmetic or otherwise. It seems as though a lot of effort has gone into getting the fundamentals right first time – which is commendable – but that each match stands alone as a solitary experience is a real shame.

Hover Junkers is a very fun experience, but that won’t last long. It sadly feels as though the developers have had to spend so much of their time working out the basics that the layers of content consumers expect simply aren’t there yet. Furthermore, it’s an expensive title considering the content offered by many other HTC Vive releases – £26.99 GBP at the time of writing – so hopefully Stress Level Zero will heed the warnings and return to add more depth to the experience before moving on to their next VR project.