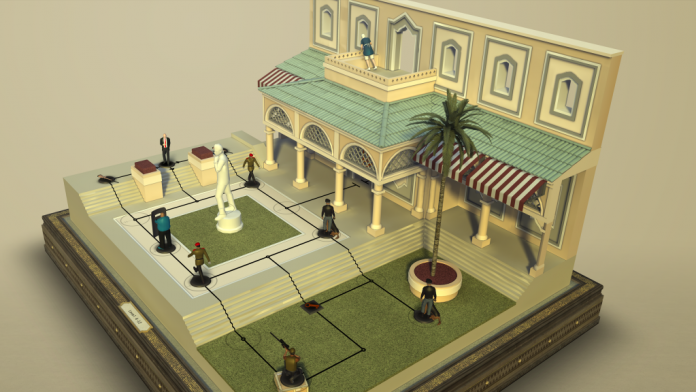 Square Enix’s Hitman GO has proven very popular on a multitude of formats. The videogame’s debut on Android and iOS devices eventually lead to a Windows Phone port, then PlayStation 4 and Steam releases, and now comes Hitman GO: VR Edition. Available for both Oculus Rift and Samsung Gear VR, Hitman GO: VR Edition is a recreation of the popular turn-based puzzle videogame designed with the benefits of head-mounted display in mind.

The core premise of the videogame is to move through the levels step-by-step, avoiding enemy sightlines and ensuring your own survival. In stating ‘step-by-step’, VRFocus means exactly that. Hitman GO: VR Edition is essentially a virtual reality (VR) board game, wherein the player moves one square per turn, followed by the enemy AI moving their player pieces all in one go on their subsequent turn. The enemy AI will only move along set paths, so it’s up to the player to ensure that they never step within the sightline of the enemy pieces knowing their routine.

There are a number of tricks the player has up their sleeve to ensure this, such as distraction techniques and indirect combat opportunities. As the videogame continues the player becomes privy to more alternate actions than simply moving back-and-forth behind cover, able to use countermeasures and interact with environmental objects. Hitman GO: VR Edition starts relatively simply, but soon builds the player to a varying arsenal of abilities as they attempt to win those all-important three stars.

Stars are distributed not only for completing the basic level challenge, but also by engaging in supplementary activities. For example, taking out all of the guards in a single level or completing the challenge in a strict number of turns. Hitman GO: VR Edition is complimented by a full suite of original Hitman GO levels – 91 in total, including all of the content updates – as standard, and yet the true pride in the videogame comes not from working your way through these, but in your ability to nail each one 100%. 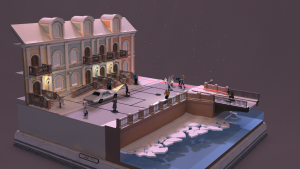 So what does VR add to the Hitman GO experience? In truth, it’s more of an embellishment of an already very enjoyable videogame than a whole new direction. The viewpoint is no longer static, with the player able to lean around the environment, surveying the action from whichever angle they believe will give them the best perspective. On the Samsung Gear VR, the head-look functionality and touchpad can be used for the entirety of the videogame’s commands (though a bluetooth control pad is recommended), while on Oculus Rift the Xbox One controller or Oculus Remote allow perfectly adequate input.

The Oculus Rift and Samsung Gear VR release of Hitman GO: VR Edition doesn’t change the formula of the videogame, but it does add a brand new level of immersion to what is already a hugely enjoyable puzzle experience. It’s hard to recommend the VR rendition of a videogame such as this to those who have already enjoyed Hitman GO to its fullest, and yet those new to this alternate take on Agent 47’s espionage action should most certainly consider Hitman GO: VR Edition the version that showcases the videogame at its peak performance.