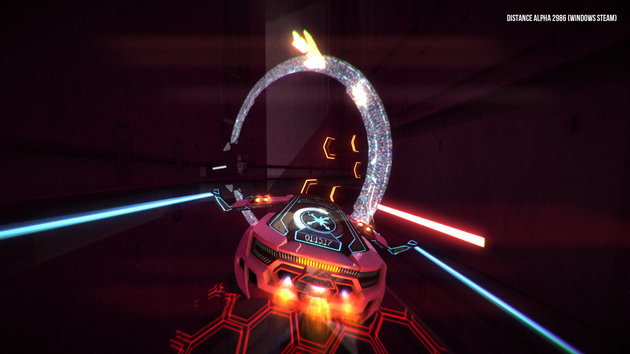 Racing titles are a popular genre for virtual reality (VR) support. The reasoning behind this is obvious; while many other experiences are still somewhat limited when sampled in VR with a head-mounted display (HMD), driving a car, bike, or other vehicle is as simple as sitting in a chair and using a gamepad, steering wheel or other peripheral. It provides the complete VR experience even in this early stage of the tech’s life. That said, indie developer Refract’s Distance is a racing experience unlike any other VR compatible title. Today, the developer is confirming that the upcoming PlayStation 4 version of the title will support the PlayStation VR HMD.

Refract had already added ‘experimental‘ support for the Oculus Rift HMD to the PC version of Distance, which is currently available in an Early Access state over on Steam. The developer’s Jordan Hemenway has now taken to the PlayStation Blog to confirm support for PlayStation VR, however.

“Virtual reality amplifies this by adding another dimension,” the developer said of the news. “You can now race through these chaotic tracks from the seat of the driver. PlayStation VR gives you an amazing sense of scale as you’re able to look into turns or glance over at other players in multiplayer. Once we started prototyping VR gameplay in Distance it was undeniable that getting a true feel for the jumps, flips, and flying is exhilarating.”

Distance is described as a survival racing videogame in which players drive across a futuristic set of courses utilising a range of moves such as jumps and driving on vertical surfaces. The title is already confirmed to be on display at the 2015 PlayStation Experience in San Francisco, California this weekend, though it’s yet to be revealed if this will be the standard 2D version or the VR edition.

VRFocus will be at the PlayStation Experience itself to deliver the latest coverage on all PlayStation VR compatible titles.